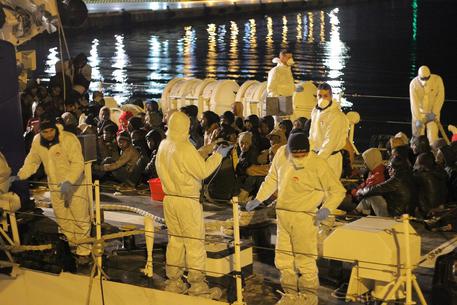 (ANSA) - Rome, February 16 - Italian Coast Guard officials rescued over 2,000 illegal immigrants in a major sea operation at the weekend, while four Kalashnikov-wielding men from Libya threatened some of the rescue agents as they brought migrants on board the Coast Guard vessels. The armed men told the unarmed rescue agents to leave them their boat after they took the immigrants off, and they left with the empty boat after the rescue took place.
Transport Minister Maurizio Lupi called for international organizations in Libya to get involved, and said the events of the weekend were "an alarming fact, showing a jump in the smugglers' expertise".
On Monday, 800 immigrants disembarked in Lampedusa, most of whom were Eritrean and arrived by way of Libya.
Between Sunday and Monday, a total of 480 immigrants arrived at Pozzallo, near Ragusa, and 285 arrived at the port of Agusta, near Siracusa.
One Gambian man stopped by Ragusa police said he agreed to pilot one of the dinghies carrying hundreds of immigrants because he was offered free passage by the Libyans who organized the crossing.
An immigrant center in Imbriacola on the island of Lampedusa is already hosting more than 800 immigrants, double its capacity, but more immigrants are expected to arrive Monday.
Immigration continues to soar in southern Italian ports, and in the first 30 days of January, 3,538 immigrants disembarked on Italian soil, compared to 2,171 in the same period of 2014.
After Italy's search and rescue operation Mare Nostrum ended in October of last year, EU border patrol agency Frontex initiated the Triton operation in November, which patrols only the waters close to Europe's coast.
Frontex boats and planes have saved a third of the immigrants arriving in Italy since November, a total of 18,180 people, said Natasha Bertaud, a European Commission spokeswoman.