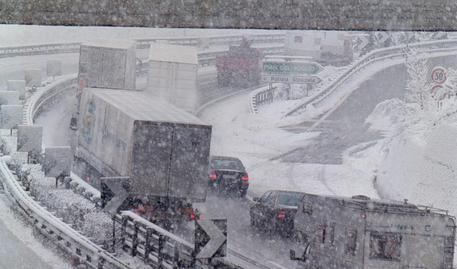 (ANSA) - Rome, February 5 - National motorway manager Autostrade per l'Italia on Thursday deployed over 700 vehicles and 2,000 staff to clear 700 km of its network of heavy snow. The situation was most critical on the A1 Naples-Milan motorway with over 40 cm of snowfall between Pian del Voglio and the Citerna pass in the mountainous Apennine area.
Early Thursday heavy goods vehicles were rerouted along parts of the motorway, which however remained open to automobiles as normal.
Forecasters said the situation was set to worsen in Emilia Romagna on Thursday evening, while conditions was set to ease up slightly in Lombardy and northern Piedmont.
Northern Italy is bearing the brunt of a double weather front that has been driving storms, strong winds and heavy rain and snow across much of the country for several days.