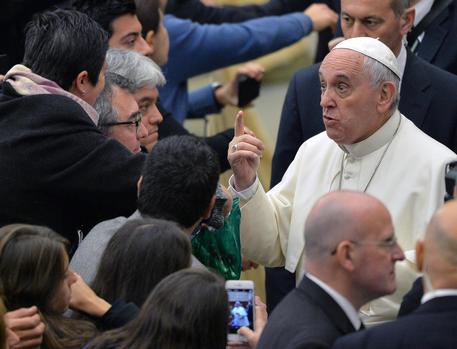 (ANSA) - Vatican City, January 29 - Homeless people will soon be able to use not only shower and restroom facilities but also a barber service in St Peter's Square, the Vatican said Thursday.
The service is an initiative of the Office of papal charities in keeping with Pope Francis' reiterated concern for the poorest and most vulnerable members of society. Haircuts and shaves will be available to Rome's down-and-outs free of charge on Mondays - the day on which barber shops and hairdressers in Italy are traditionally closed - starting February 16 in specially renovated premises under St Peter's colonnade. The service will be provided by volunteer barbers from UNITALSI (Italian National Union for Transport of the Sick to Lourdes and International Shrines) and Rome's barber school, who have already donated razors, brushes, scissors, a mirror and a barber's chair towards the effort.
The three new showers and toilets ordered by the pope last November should also come into operation in the same premises on the same day. "The first thing we want is to give people their dignity," Monsignor Konrad Krajewski, the Polish archbishop who heads up the Office of papal charities, told ANSA. "A person who isn't able to wash is rejected by society and we all know that a homeless person cannot enter a public place such as a bar or restaurant and ask to use the services because these are denied," the papal almoner continued.
"But of course showering and being able to wash one's underwear is not enough. It is also necessary to have tidy hair and a neat beard, also to prevent disease," Krajewski said. "This is another service that a homeless person might have difficulty accessing in a normal shop because of fears of the spread of diseases such as scabies to the other customers," continued the prelate.
The 'Pope's barber' therefore aims to provide a service "for the common good of the city", he said. The project comes on the heels of November's order by Pope Francis for showers to be built for the homeless in St Peter's Square.
"We are not doing anything extraordinary because bathrooms and showers are the ABC of a community," Krajewski said at the time.
"In Rome all the public restrooms have been shut down and it would suffice to close your bathroom at home for two days to understand what it means to not be able to wash," the Polish prelate said.
"I say this also to (Rome) Mayor Ignazio Marino, who is a doctor - where should these people go to relieve themselves?" "This is just helping in an intelligent way, when I speak to politicians they speak of so many things but they don't touch on the real questions and meanwhile so much money is thrown away," the monsignor added.