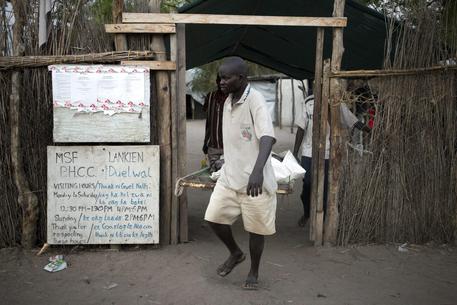 (ANSA) - Rome, January 23 - Two people were wounded when a Doctors without Borders (MSF) hospital in the African country of Sudan was bombed by nation's air force, the medical humanitarian NGO said Friday.
The air strike that took place Tuesday in the village of Frandala in Sudan's South Kordofan region left one MSF staffer and one patient injured, and caused extensive damage to the hospital housing some 100 patients.
MSF says the SAF dropped some 13 bombs, two of which fell inside the hospital and the rest immediately adjacent.
"We condemn this bombing in the most categorical terms," said MSF Sudan mission chief, Marc Van der Mullen.
"People had absolutely no time to seek shelter". The NGO denounced what it said is an indiscriminate bombing campaign by the government as it battles rebels in the nearby Nuba mountains.
The Frandala hospital has been in the line of fire before.
The Sudanese military bombed it in June 2014, killing one patient, wounding several, and damaging the building.
"Once again, MSF calls on authorities to respect the assistance we provide," Van der Mullen said.
"In spite of what happened today we will try to continue bringing aid to the local population, which has found itself in the middle of a war that hardly anyone talks about".