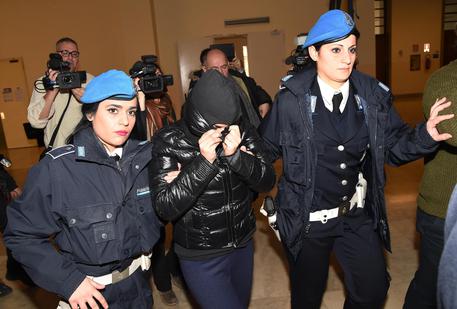 (ANSA) - Milan, January 16 - A young woman on trial in an acid attack that may leave an ex-boyfriend partially blind had also planned to castrate another ex last May, prosecutors said Friday.
Martina Levato, a 22-year-old student at Milan's private Bocconi university, and property broker Alexander Boettcher, 30, are on trial for a December 28 attack in which acid was thrown on the face and body of 22-year-old Pietro Barbini.
Judicial sources earlier said the pair, also on trial on charges of robbery and holding stolen goods, were being investigated for other similar attacks.
Friday, prosecutors said they believe Levato intended in May to castrate a man after a relationship between them ended. In that case, prosecutors alleged she arranged a meeting with another young Bocconi student with whom she had had a previous summer romance.
While sitting in her vehicle near the university, Levato allegedly insisted they move into the back seat of the car for sex, and told him to close his eyes because she had a surprise for him.
She then allegedly pulled a knife hidden earlier in the two-door car from which the victim could not escape, and stabbed at his crotch, resulting in cuts to his hands as the young man defended himself.
Levato has been accused of slander in that case because she reportedly told people he had tried to attack her.
She and Boettcher are currently on trial for grievous bodily harm with cruelty, with premeditation as an aggravating circumstance in connection with the acid attack against Levato's former boyfriend Barbini.
He is at risk of losing the use of his right eye as a result of the attack, which left him with third-degree burns to his face and body.
On Thursday sources said Levato and Boettcher were also being probed for attempting to throw a "corrosive liquid" at a young man identified only as G.C.
That attack reportedly failed.
Investigators are also exploring the possibility that Levato and Boettcher might have attempted other similar attacks against people who are "in the course of being identified" and have searched the couple's homes and cars.