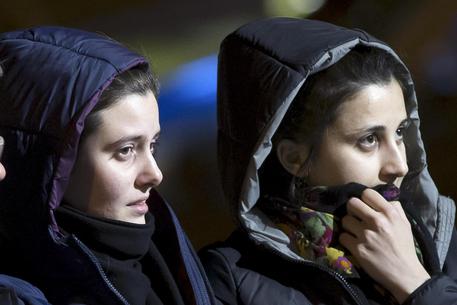 (ANSA) - Rome, January 16 - Rumours suggesting that Italy paid a ransom to free two young hostages kidnapped in Syria last summer are "just conjecture", Foreign Minister Paolo Gentiloni said Friday. The Italian government, like its predecessors and in line with international practice, is against paying ransom to free hostages, Gentiloni told the Lower House after welcoming home aid workers Greta Ramelli and Vanessa Marzullo. The two women arrived in Rome early Friday after almost six months in captivity. When their release was announced Thursday, opposition Northern League leader Matteo Salvini referred to media reports suggesting the Italian government paid a 12-million-euro ransom and denounced the practise. Italy has been on the front line against terror since the September 2001 attacks on the United States and "won't be lectured by anyone on that", Gentiloni said as he reported to the House on the situation. Rome will reaffirm this stand at an upcoming conference of the coalition fighting Islamic State (ISIS) extremist militants in Syria and Iraq, he added. The women, wearing winter parkas and looking exhausted from their ordeal, were greeted with long hugs from their parents, family and friends, who drove down from Lombardy to meet them in Rome. Marzullo, 21, and Ramelli, 20, arrived in Syria July 28 to volunteer on health and water-related humanitarian aid projects, and were abducted just three days later.
The aid workers arrived in Rome at about 4:20 a.m. Friday after a three-hour flight from Turkey on an Italian military plane. Marzullo was greeted by her parents and brother while Ramelli was welcomed by her parents, her brother and his fiancée, as well as two school friends who are also aid workers.
They later met with prosecutors investigating a case of kidnapping with terrorist intent.
The two young women said they were held in various prisons in northern Syria. Their jailers always covered their faces, but never threatened to kill them. The conditions of their captivity were tough but bearable, and they were not abused or subjected to violence. As well, the two young women reportedly told prosecutors they didn't know anything about a ransom being paid for their release.