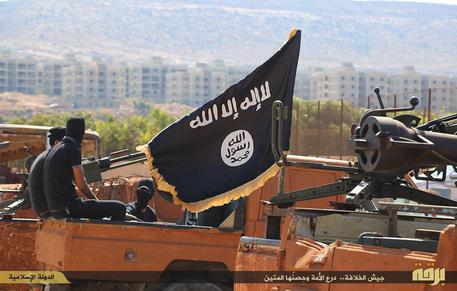 (ANSA) - Rome, January 14 - Rome media offices should beef up security against possible jihadi attacks after last week's massacre of 12 people at the Charlie Hebdo office in Paris, the Rome prosecutor's office said Wednesday. Entrances to editorial desks should be guarded, metal detectors installed and CCTV surveillance cameras should be linked to police and Carabinieri nerve centres, it said. Rome is ramping up security at sensitive sites after the Charlie Hebdo attack and other French assaults that reaped 17 victims in all.
A Rome probe into a dozen suspected jihadi fighters is focusing on the trips some of them made to foreign combat zones, judicial sources said Wednesday.
Investigators are trying to establish whether they came into contact with terrorism instructors for training sessions, the sources said.
The suspects were said to have originated in the North African Maghreb region, especially Morocco, as well as Syria and Iraq.
Islamic State, the militant group which has carved out a self-proclaimed caliphate in swathes of Syria and Iraq, has threatened to defeat "crusaders" and bring death and destruction to their homelands including Rome, the cradle of Christianity.
Foreign Minister Paolo Gentiloni said earlier this week "there are no specific terror threats to Italy (but) there is a context that raises concerns".
Interior Minister Angelino Alfano said Italian authorities had found no confirmation of reports that the Vatican could be the next target of Islamist fighters.
Rome's four lead investigators on the case said Wednesday they would hold a "summit" in the coming days. News of the probe came Tuesday night.
Prosecutors in the Italian capital said they had placed 10 or more suspected Islamist militants under investigation on charges of subversive association with terrorist intent. The probe reportedly began several years ago and is unrelated to last week's bloody terror attacks in France.
The suspects are all foreign residents of the Muslim faith, and were identified through surveillance of online chats and extremist and fundamentalist websites, investigators said. The 10 suspects reportedly do not make up a cell but are being considered "lone wolves", sources said. In Milan, at least three investigations are ongoing into alleged Islamic fundamentalist activity.
One of the probes concerns a woman of foreign descent who left Milan for the Middle East. A second investigation concerns 27-year-old Maria 'Fatima' Giulia Sergio, a resident of the Milan suburbs who allegedly left to fight in Syria. A third probe, which has been ongoing since 2012, is focused on a group of Syrians, sources said. Intelligence sources said they are keeping several dozen possible suspects under constant surveillance because they are deemed to be at risk of becoming terrorists.
They include Italian converts to Islam, preachers, very young second-generation migrants, and veterans of Balkan and Afghan wars.
Islamic extremism appears to have taken root to some degree in the cities of Bergamo, Brescia, Rome, Milan, Naples, and in the Emilia Romagna, Piedmont, Tuscany, and Veneto regions, intelligence sources said.
There are no signs or chatter about any terrorist plans or plots being underway in Italy at the moment, the sources said. The majority of the potential suspects got radicalized on the Web through jihadist forums and propaganda sites, with the exception of the veterans of foreign wars, who possess both ideological and military training, the sources said.
The Lazio schools office on Wednesday warned schools in Rome and the surrounding region against making trips to Paris and the Ile-de-France amid a high alert on jihadi threats following last week's attacks.
Sources said other Italian regions might follow suit.
Amid Rome's security clampdown, the German government on Wednesday approved confiscating for up to three years the documents of Islamist suspects planning to reach Syria or Iraq.
If the measure is passed by the Bundestag the suspects will be given special papers stating they cannot leave Germany.