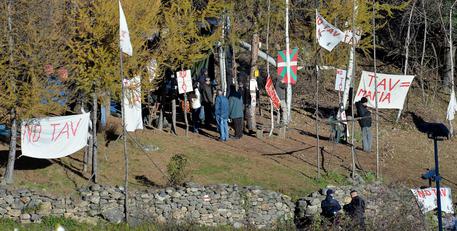 (ANSA) - Turin, December 29 - A court on Monday threw out terrorism charges against three anarchist militants arrested in connection with a May 2013 attack on a high-speed rail (TAV) construction site in Chiomonte.
The three anarchist sympathisers remain in jail however pending trial on charges of making petrol bombs and resistance against a public official, according to Notav.info website.
Lucio Alberti, 24, Graziano Mazarelli, 23, and Francesco Sala, 26, were arrested one year ago.
Police at the time said roughly 30 hooded militants broke into the construction site under the cover of nightfall and tore down fences and blocked machinery.
In a nearby incident, several other activists confronted police with fireworks and Molotov cocktails.
The latest court decision follows huge disruption of rail services last week in many parts of Italy after an arson attack on Bologna's Santa Viola station that Transport Minister Maurizio Lupi blamed on protesters against the TAV link between Turin and Lyon.
The high-speed rail line project has sparked years of protest from locals and other activists who denounce its high cost and damage to the environment.
France and Italy argue it will save money and help the environment in the long run by cutting down on automobile traffic.