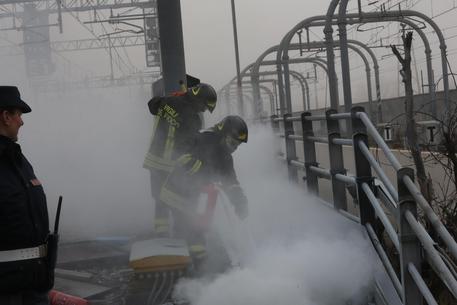 (ANSA) - Rome, December 23 - Rail services in many parts of Italy suffered huge disruption on Tuesday, with big delays and cancellations, after an arson attack on systems near to Bologna's Santa Viola station.
Transport Minister Maurizio Lupi blamed protestors against construction of the TAV high-speed rail link between Turin and Lyon. No-TAV graffitti was found in the area of the attack.
A similar act of sabotage hit the Rome-Florence high-speed line last weekend and others have been registered in recent months. "What I feared would happen has happened - a new act of terrorism against the TAV; that is what this morning's arson attack was, nothing else," Lupi said. "But they won't stop us on the road to innovating and changing Italy". During a visit to a TAV work site at Chiomonte, near Turin, Lupi said he was worried about a new strategy he said has been adopted by hardcore protestors against the TAV. "Being as they can't stop the Chiomonte site, some are continuing with attacks that on the symbols of high speed rail," he said.
"We will not be intimidated," Interior Minister Angelino Alfano said later.
"The work will be completed," he added.
Premier Matteo Renzi steered away from talking of terrorism, which in Italy summons memories of the country's 'years of lead' of political violence in the 1970s and 80s.
"Let's not re-invoke words of the past," Renzi said on Italian radio.
"A sabotage operation is taking place and we are looking at what happened.
"We are monitoring the situation. Something similar happened a few days ago in other cities, although it didn't have such a big impact".
Bologna prosecutors have opening an investigation into crimes including provoking a rail disaster, interruption of public services and criminal damage.
"It's an episode that worries us," said prosecutor Roberto Alfonso, while stressing that it was too early to "draw conclusions" about whether it was an act of terrorism.
Earlier this year, a militant group calling itself the Armed Operational Nuclei (NOA) reiterated its call for opponents to the TAV to join its "armed struggle" against the Italian authorities.
Police conducted searches of the homes of people linked to extreme anarchist circles in the Bologna area Tuesday, but they did not produce anything of significance, ANSA sources said. Protests against the Turin-Lyon link have frequently turned violent in recent years, but the sabotage of unrelated rail structures is a relatively new phenomenon. Critics have said the high-speed TAV project will cost too much and wreak terrible environmental damage in the Alpine region of Piedmont. But the Italian and French governments say it will reduce highway traffic and, in the long run, be good for the environment. Last week, a Turin court sentenced four 'No-TAV' protestors to three years, six months each in prison after convicted them for a May 2013 attack on a TAV site. But the court acquitted of the four of terrorist charges and they were released from jail and put under house arrest on Tuesday.
Lupi said last week that he hoped prosecutors would appeal. "If putting on hoods and organising an attack on the State is not association for terrorist ends, someone must explain to me what it is," Lupi said.