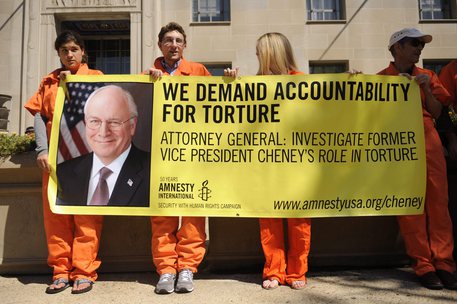 (ANSA) - New York, December 22 - A New York Times editorial published Monday called on United States President Barack Obama to prosecute "torturers and their bosses" including former vice president Dick Cheney in connection with the CIA torture scandal that came to light following a Senate Intelligence Committee report earlier this month.
According to the New York Times, such a criminal investigation "is not about payback - it is about ensuring that this never happens again, and regaining the moral credibility to rebuke torture by other governments".
The editorial called for the indictments of Cheney, his then chief of staff David Addington, former CIA Director George Tenet, lawyers John Yoo and Jay Bybee, who drafted the so-called "torture memos", CIA Agent Jose Rodriguez, who ordered videotapes of the torture sessions destroyed, the psychologists who came up with the techniques, and CIA staffers who carried the torture out.
Also on Monday, the American Civil Liberties Union (ACLU) and Human Rights Watch (HRW) sent US Attorney General Eric Holder Jr. a letter requesting the appointment of a special prosecutor to investigate what they said was "a vast criminal conspiracy to commit torture and other serious crimes under color of the law".
On Monday, the US, along with other countries, will meet with the UN Security Council to denounce North Korea for systematic violations of human rights in its prison camps.
A damning US Senate report earlier this month revealed the CIA used "brutal" interrogation methods on terrorism suspects and misled policymakers in the White House about them.
"Today's report by the Senate Select Committee on Intelligence details one element of our nation's response to 9/11 - the CIA's detention and interrogation program, which I formally ended on one of my first days in office," Obama said in a Decembe 9 statement.
"The report documents a troubling program involving enhanced interrogation techniques on terrorism suspects in secret facilities outside the United States, and it reinforces my long-held view that these harsh methods were not only inconsistent with our values as nation, they did not serve our broader counterterrorism efforts or our national security interests".