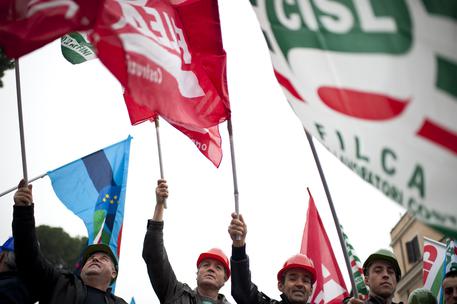 (ANSA) - Rome, November 28 - Trade unions representing civil servants said Friday they have filed an appeal with the courts over the government's freeze on contracts, including pay increases, for public-sector workers.
The CGIL, CISL and UIL unions said proceedings are beginning at the Court of Rome level but they expect the case will reach the Constitutional Court for a ruling on the unions' challenge to the legitimacy of the government freeze.
More than one year ago, unions warned of social conflict over the freeze on contracts, that dates back to 2010.
They said that public employees are "the only category treated in this way - conflict will be inevitable".
The three unions have planned two major demonstrations - the first on Monday when the CISL plan to protest, while the CGIL is leading a national general strike on December 12.
Salaries of Italy's 3.3 million public employees have been frozen over the past five years and turnover blocked as part of measures to curb public spending as the country is grappling with years of economic stagnation and recession.
Huge public debt also hangs over the administration of Premier Matteo Renzi, who is under pressure from the European Union to cut debt and the deficit.
Even salary negotiations with public sector workers have been frozen.
"The discrimination and the humiliation that public workers are subjected to by the Renzi government demonstrates they are bad bosses," said Rossana Dettori, secretary-general of the public-sector branch of the CGIL.