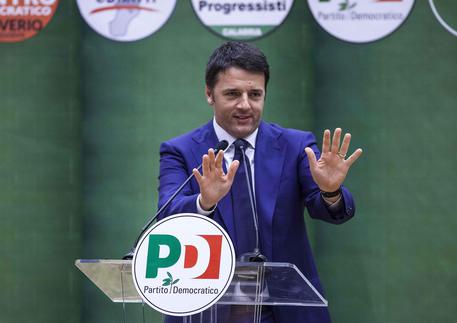 (ANSA) - Rome, November 24 - Center-left Premier Matteo Renzi was sanguine on Monday as record low turnouts swept two of his Democratic Party (PD) candidates to the governorships of the wealthy north-central Emilia-Romagna region and the impoverished, mob-ridden southern Calabria region in local elections at the weekend.
Stefano Bonaccini won in Emilia-Romagna with over 49% of the vote, compared to almost 30% for the Northern League's Alan Fabbri, who was backed by centre-right parties. In Calabria, Mario Gerardo Oliverio won with 61.3% while the centre-right's Wanda Ferro took around 23.7% of the votes.
But turnout was alarmingly low by Italian standards. In Emilia-Romagna 37.7% of voters cast ballots, compared to 68% at regional elections in 2010 and 70% in May's European elections. In Calabria the turnout was 44.1%, compared to 59.3% at the previous regional elections and 45.5% in the European elections. "Turnout bad, results good," tweeted Renzi. "A clear 2-0". "The low turnout is something to worry about, but it's secondary," he told a press conference in Vienna after meeting Austrian Chancellor Werner Faymann. "I'm not interested in planting flags, but in tackling the problems of the Italian people". However, added the premier, all of Italy's political parties must think about what this means. "The abstention rate is very high and that should make all the parties reflect," said Renzi. "But the result went very well for the PD. It's a clear win," he added. His government's reformist agenda will not change, said the premier. "We said beforehand that it wasn't a referendum on the government," Renzi told RAI radio. "Even more so following this clear result. The government's agenda isn't changing, although we are aware that, if we all get rid of the culture of whimpering, Italy has a role to play".
Renzi added he is undaunted by the growing popularity of the separatist Northern League under new leader Matteo Salvini after it claimed over 20% of the vote in Emilia-Romagna. "While the centre-right discusses its plight, we are changing Italy. After 20 years of failures, including those of the League, we are working for the country and come election time, you'll see which is stronger," Renzi said. Earlier on Monday, Salvini, who became head of the League almost a year ago, said the Renzi "balloon is deflating" while the League was "flying". One loser in Sunday's elections was the anti-establishment 5-Star Movement (M5S), which took a serious hit, failing to win a single seat in the Calabria regional assembly and seeing its share of the total vote plunge to about 5%, well down from its 21.5% share in the May vote for European Parliament, according to results. In a post on his blog, Grillo attributed the debacle to the fact that in his view, citizens were rejecting government policy, which reflects the country's "lost democracy". A prominent MP from within Berlusconi's party said the party must get rid of its current candidates and revamp itself.
"I sincerely hope no one will dare minimize or seek alibis for the dramatic results in Calabria and Emilia Romagna," said Raffaele Fitto, a one-time confidant of Berlusconi who now leads a dissenting minority within FI that is not happy with the fact that the ex-premier has entered into negotiations over electoral law reform with Renzi.