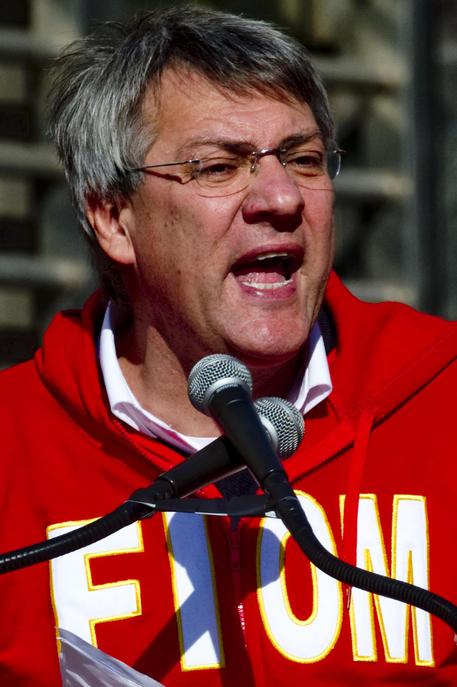 (ANSA) - Rome, November 24 - Workers at Terni's troubled AST steel plant will not accept a deal "at any cost" to save their jobs, the leader of FIOM metalworkers union warned Monday, triggering a reprimand from government.
Cabinet Secretary Graziano Delrio said Maurizio Landini's words were a "concern" for the government.
"We think it is a time of responsibility for everyone," said Delrio.
A proposed agreement "will safeguard jobs and avoid more than five hundred planned layoffs" that had been threatened by the German-owned company that controls the plant in central Umbria, Delrio added.
Landini, who said he planned to meet FIOM union members in Terni later in the day, said that the proposed agreement was not necessarily rejected but it needed to be carefully examined.
"The message that I think we want to send is this...we believe we can basically go towards an agreement, but you cannot make a deal at all costs," said the union leader.
"It must be an agreement that includes...a precise choice of industrial policies," that includes continued steel production and sales by the plant's parent company ThyssenKrupp, said Landini.
The company's original plans to cut 550 jobs and 100 million euros in investments at the plant led to a series of strikes and protests in recent months, some of which turned violent.
In July, the company also said it intended to shut down one of the two furnaces at the Terni plant. However, in August the company accepted a government appeal to put that plan on hold so talks could take place following industrial action.
By early November, ThyssenKrup had reportedly agreed in government-brokered talks with labor to keep both furnaces open and invest 200 million euros.
But the parties have yet to agree on a final version of the company's revised industrial plan.
Last Friday, Premier Matteo Renzi said his government was "very close to a solution".
One day earlier, AST CEO Lucia Morselli said that the company's steel plant won't be dismantled.
"The intention is to maintain the Terni production site in its entirety, excluding any hypothesis of dismantling the facilities," read a message to staff signed by Morselli and attached to the Terni plant's gates.
Earlier in the month, unions said they saw eye to eye with the government on keeping both furnaces at the troubled AST steel plant in operation, labor sources said.
As well, Italy has called for a European Union task force to monitor compliance with the new industrial plan proposed by ThyssenKrupp.