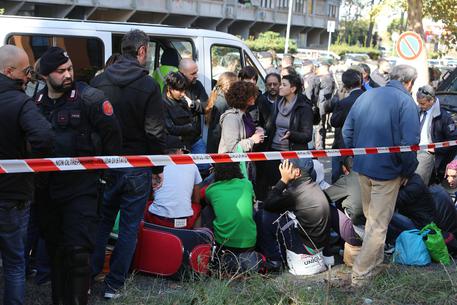 (ANSA) - Rome, November 14 - Fourteen of the 36 underage refugees who were transferred Thursday out of a migrant reception center in an outlying Rome neighborhood after repeated violent attacks by anti-immigrant local residents have returned to the very place authorities had deemed to be unsafe for them, sources said Friday.
"You are our mothers and fathers," the kids told operators at Il Sorriso (The Smile) refugee center in the low-income neighborhood of Tor Sapienza, where where lack of services, non-existent street lighting, and a spiking crime rate including a number of attacks on women after dark have inflamed public sentiment against the local Albanian, Romanian, and Roma populations.
But the refugees - who fled war and poverty in North Africa and the Midlle East, were scooped off unseaworthy boats by Italy's now-defunct Mare Nostrum migrant search-and-rescue mission, and were placed at Il Sorriso - have borne the brunt of popular hatred and xenophobia, with violent attacks by gangs of masked residents wielding sticks, breaking windows, lobbing stones and bottles, setting dumpsters on fire, and injuring police officers.
Authorities transferred the youngest ones out on Thursday, but some of the kids apparently had their own ideas about where they want to be - even at the risk of injury.
"We want to come back here and keep taking your classes," the teenagers told those who had cared for them, and sat down on the sidewalk outside the refugee center.
"We want you all gone," local residents shouted at them from the other side of the street.
A local woman had a slightly different take on the situation, however.
"The kids said they ran away and came back on foot," a lady who lives opposite the refugee center told ANSA.
"I think the operators made them come back, because refugees are their livelihood. They take advantage of these kids. The immigrants can stay, because they are victims of indifferent authorities just like we are. We want the operators gone".