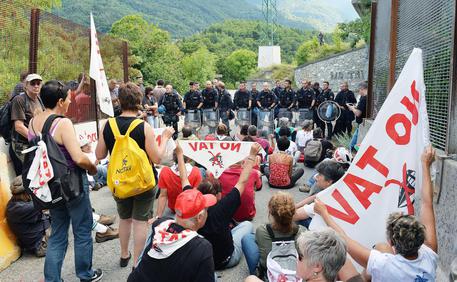 (ANSA) - Turin, November 14 - Turin prosecutors on Friday requested nine and a half-year prison sentences for four defendants in a terrorism trial in connection with protests against a high-speed rail (TAV) line being built in Piedmont's northern Susa Valley.
Charges against Claudio Alberto, Nicolò Blasi, Mattia Zanotti and Chiara Zenobi include terrorism for an attack on a TAV construction site near the town of Chiomonte on May 14 last year.
Police at the time said roughly 30 hooded vandals broke into the construction site under the cover of nightfall and tore down fences and blocked machinery.
In a nearby incident, several other activists confronted police with fireworks and Molotov cocktails.
The four defendants, alleged anarchists, have been in jail since December 9 last year. They stood by their actions during trial, sources said.
The incident "was an attack on the State, its choices and basic interests," prosecutors argued. "We must evaluate actions not ideas. Like it or not...the TAV project is the economic and political choice of a democratic State".
The high-speed rail line, which will eventually connect Turin to Lyon, has sparked years of protest from locals and other activists who denounce its high cost and damage to the environment.
France and Italy argue it will save money and help the environment in the long run by cutting down on automobile traffic.