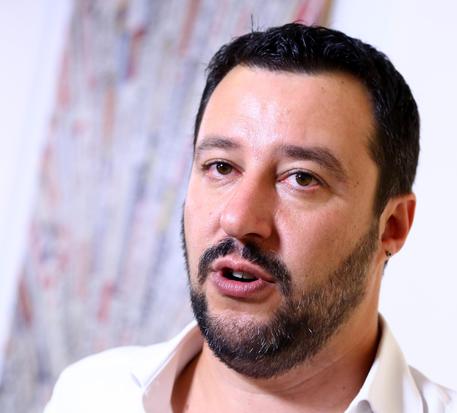 (ANSA) - Rome, November 10 - Northern League Secretary Matteo Salvini on Monday demanded that violence he faced at a Roma camp be condemned amid controversy over the absence of a police escort during his visit.
"No ifs, ands, or buts, condemn and reject every kind of violence or I stop," Salvini said Monday.
Windows on a car carrying Salvini and other League officials were smashed when he visited a camp near Bologna on Saturday.
Salvini immediately posted about the experience on social media with photos of his smashed car.
Salvini had given notice of what some said were his "provocative" plans to visit the camp, but he complained on Monday that he had not been given adequate police protection.
Bologna police defended themselves, saying that special DIGOS security police were assigned to provide an escort for Salvini and had arranged with League officials to meet them.
However, due to miscommunications about Salvini's plans and timetable, they did not connect with the League leader who went to the camp without that escort, police said.
Riot police were stationed at the camp after an incident earlier in the week when a League member, regional councillor Lucia Borgonzoni, was slapped across the face by a young woman during a visit to the Roma camp.
When Salvini arrived at the camp, he reportedly stopped the car just outside because the road was blocked by young residents of the car. It was then that some young men began kicking at the car, one even climbing onto the roof. Salvini and the officials then drove a short distance away and stopped to speak with reporters. Salvini later posted on Facebook: "The thugs have destroyed the car, but we're fine, you bastards".
Bologna police chief Vincenzo Stingone said in an interview with La Stampa newspaper that police contacted Borgonzoni, who was travelling with Salvini, at 11 a.m. Saturday asking her to tell police when they would arrive at the highway approach to Bologna so the escort could meet their car at that point.
Instead, he said, the escort squad reported that only at 11:50 a.m. did they hear that the League officials' car had been attacked at the camp.
"At this point we moved, but two minutes later (Borgonzoni) had called back saying they had been attacked," said Stingone.
On Sunday, Graziano Delrio, Secretary of the cabinet of Premier Matteo Renzi, said that violence "is always unacceptable" but also criticised Salvini. "I have always distanced myself from propaganda efforts," said Delrio.
Interior Minister Angelino Alfano shrugged off League calls for his resignation Sunday, saying he receives those every day.
Felice Romano, secretary general of police union Siulp, said that although police condemn violence, they felt they were being made a scapegoat for political gain.
"Just as firm (as condemnation of violence) is our condemnation of those who, for political exploitation for electoral purposes, try to download responsibility for what happened on those responsible for public order," said Romano. A Democratic Party (PD) MP from Bologna on Friday berated city authorities' decision to give Salvini permission to visit the Roma camp.
"Salvini's move is a dangerous provocation...that will only foment hatred," said MP Andrea De Maria.
"There is nothing worse than blowing on the fires of intolerance in times of economic crisis and social suffering," he said.
Salvini's party is allied in the European Parliament with far-right, anti-euro parties from three other countries including the National Front of Marine Le Pen.
Italy has been repeatedly criticized by human rights watchdogs like Amnesty International for ongoing discrimination against the Roma people's rights to education, housing, health care and employment.