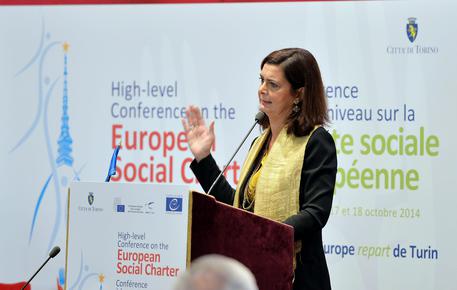 (ANSA) - Rome, November 10 - The end of Italy's migrant rescue operation Mare Nostrum has created a troubling gap in services to those fleeing their home countries via the Mediterranean, Lower House Speaker Laura Boldrini said Monday.
"Now that the operation has ended, how can one ignore the fact that deaths are increasing?" Boldrini asked during an address at a conference of the European Union's Agency for Fundamental Rights (FRA).
Boldrini said some 3,000 immigrants have died on the Mediterranean since the beginning of 2014. "Three thousand people dead sounds like a war," Boldrini said.
She called on the 28 member states of the EU to furnish alternatives, such as formal resettlement programs, to immigrants.
On November 1, Mare Nostrum was replaced by the Triton operation of the EU's Frontex border patrol agency.
Boldrini expressed "serious worry" because Triton is not designed as a substitute rescue program has a border control responsibility and less funding.
She said she was also concerned by public perceptions about migrants.
She said a poll by British newspaper The Guardian found that some Italians believe immigrants make up as much as 30% of their population, while the actual figure is only 7%.
"Media reports and political campaigns based on exclusion, discrimination and fear of the other are making headway in public opinion perception of immigrants," she said.
"Politicians and the media have a fundamental role and enormous responsibility," Boldrini said.