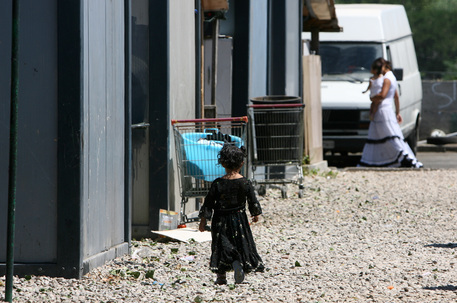 (ANSA) - Rome, November 4 - Italy could face an infringement procedure by the European Commission (EC) over its "segregationist" housing policy for ethnic Roma, an activist association said Tuesday.
The Roma and Sinti rights association 21 Luglio said the Italian government had been asked to provide "additional information" concerning the living conditions of Italy's 150,000-180,000-strong population of Roma, Sinti and Travellers who are largely confined to more or less equipped camps on the remote outskirts of major towns and cities, citing a letter from the EC Directorate-General for Justice. The EC is particularly concerned about conditions at the La Barbuta nomad camp in east Rome, the association added.
In the letter the commission said it shared "the concerns expressed by the Council of Europe's human rights commsissioner over this kind of accommodation for Roma at a site that is extremely remote and inaccessible, and equipped with fencing and surveillance systems." Such accommodation "seriously restricts the fundamental rights of the interested parties by completely isolating them from the outside world and depriving them of adequate opportunities for employment and education," the letter continued.
Rome's La Barbuta camp came to public attention earlier this year following the announcement of plans to build a Leroy Merlin hyperstore in its place. Under the project, the French DIY giant would build a new 'village' for 400 of the current 580 inhabitants near the existing site.
The remaining 180 residents would be relocated elsewhere.