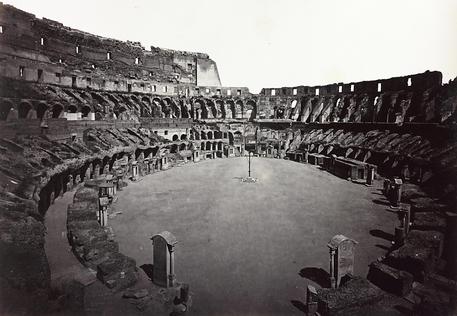 (ANSA) - Rome, November 3 - The proposed restoration of the Colosseum's killing floor has sparked a keen debate in Italy after the culture minister suggested the storied stage for ancient gladiatorial and animal fights could be built back into Rome's most iconic monument.
In a tweet on Sunday, Cultural Minister Dario Francheschini said it would "just take a little courage" to do so.
The idea to restore the stage was suggested by archeologist Daniele Manacorda in July in the archeological journal Archeo.
In Sunday's tweet, Francheschini included a visual comparison using a modern photo showing the exposed underground tunnels, along with one from the mid-1800s in which the stage was still in place over the tunnels, similar to ancient times.
Francheschini tweeted: "I really like the idea of giving the Colosseum its arena back", along with the photos, showing the Colosseum both before and after the excavations of the so-called hypogeum (literally, 'under ground') area. The 2,000-year-old symbol of Rome expanded its range of tourist attractions when it began allowing access to the underground pits where gladiators and beasts awaited their fate on the ancient stage.
In a multi-million-euro project, the hypogeum underground area was restored and opened to the public in October 2010 with new, muted lighting effects.
Rossella Rea, superintendent of the monument formally known as the Flavian Amphitheatre, said the hope was to have recaptured 'some of the atmosphere' of the breathless moments before the games commenced, when the armoured or naked fighters and the wild animals were hauled up through 80 trap-doors.
Adding back an arena stage in the Colosseum, which attracts five million visitors a year, would allow the cultural ministry to sponsor and offer performances in the Colosseum, as well as tours more suggestive of its original underground atmosphere.
Francheschini's support of the idea falls in line with other initiatives the culture ministry has launched in recent times to increase the number of visitors to monuments in Rome, such as the evening multimedia light show in the Forum of Augustus that was put in place this year to celebrate the 2000th anniversary of the first emperor's death.
The idea of bringing back the killing floor hasn't met with full support from experts in the field, however.
"It's a culturally weak idea, commonplace and banalizing," said art historian Tomaso Montanari.
"With all there is to do, with all the enormous cultural heritage in danger, so many unknown things among our treasures, is it right for the cultural minister to focus on the Colosseum and its use as a performance venue?" Montanari asked.
Art historian and archeologist Salvatore Settis said Italy is facing a "dramatic moment for cultural heritage protection" and that the Unblock Italy law has "devastating regulations" that make restoring the Colosseum's stage "an unreasonable priority".
Manacorda, the archeologist who proposed the idea, said, "I don't see any problems [in restoring the arena]. Giving the underground back its 'undergroundness' means offering the possibility of visiting the underground labryinth in a way that makes sense".
Manacorda said restoring the stage would return the Colosseum to its origins as a place for hosting public events and shows.
Also in support of the idea is the former superintendent of Rome's antiquities for nearly 30 years from 1976-2004, Adriano La Regina, an archeologist and art historian.
"The Colosseum was designed to be an arena," La Regina said, but he also cautioned that the expense to restore the arena as well as the upkeep costs should be taken into consideration.
Construction on the iconic arena started between 70 and 72 AD under the Emperor Vespasian.
It was completed in 80 AD by his son Titus, who financed the project from the booty his armies seized in the war against the Jews in 66-70 AD.
Titus inaugurated it with 100 days of games including the recreation of a sea battle between Romans and Greeks.
The father-and-son team - the so-called Flavian emperors - built their monument to Rome's grandeur in travertine stone before giving it the marble cladding that amazed contemporaries - and was still its crowning glory until generations of popes picked away at it for their own architectural testaments.
The monument is currently undergoing a 20-million-euro clean-up and restoration sponsored by Diego Della Valle, the billionaire owner of Italian leather goods company Tod's.