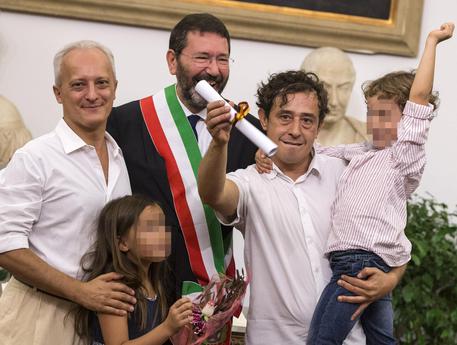 (ANSA) - Rome, October 31 - Rome Mayor Ignazio Marino said Friday he would not obey the city prefect's order to scrub the recent transcription of foreign gay marriages. "We do not accept the prefect's order to cancel the transcriptions that have already been logged," he said of his purely symbolic move. Marino in his defiance of the interior minister joins a number of mayors across Italy, including those of Milan, Bologna, Udine and Grosseto.
He walked into contested, administrative no-man's land earlier this month when he transcribed 16 same-sex marriages legally performed abroad at the Rome prefecture.
In Italy, civil unions between same-sex partners are not yet nationally recognized, much less marriage, which is defined as a union between a man and a woman. However the recognition of same-sex marriages performed abroad, especially in countries with which Italy is bound by treaties, the question is subject to debate.
Marino has received support from gay activists and lawyers of couples whose marriages were transcribed, but the Catholic political movement Italia Cristiana has registered a formal complaint against Marino for contravening State law. The movement also called for the centre-left politician to be removed from his post.
On Friday, New York City Mayor Bill de Blasio called Marino and reportedly praised his "strong and courageous stance", telling him to "keep going my friend, keep fighting the good fight".
De Blasio, a liberal Democrat, met with Marino, who is from the ruling Democratic Party (PD), during a visit to Rome in July, when he was on his way to visit his family's ancestral home on the island of Capri.
"I feel at home," De Blasio enthused at the time. "I feel close to my family. Mayor Marino and I hit it off right away".