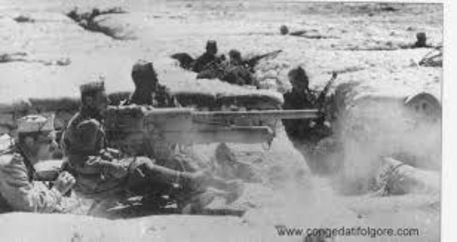 (ANSA) - Livorno, October 31 - Italian troops who fought and were defeated in the battle of El Alamein "lost with great honour," the Italian Defence ministry chief of staff Luigi Binelli Martelli said Friday.
Speaking at a ceremony in the Tuscan port city of Livorno to mark the 72nd anniversary of the 2nd World War battle between Allied and Axis forces in north Africa, Mantelli paid tribute to 3,500 Folgore regiment paratroopers who took part valiantly with very heavy losses sustained against British troops, saying that "spirit of service and cohesion are fundamental elements for the operational capacity of the armed forces." "The paratroopers have always shown this. El Alamein was a battle that was lost with great honour, facing up to overwhelmingly superior fire power with poor weapons but with great spirit and capacity to resist and to hold up high the honour of Italy".
The ceremony held at the Vannucci barracks was attended by Army Chief of Staff Claudio Graziano as well as the current commanding officer of the Folgore, Lorenzo D'Addario.
Italy has made strides in recent years in reversing the stereotypical image of the Italian soldier's alleged eagerness to retreat or surrender in WWII.
Two years ago, on October 30, 2012, an historical park was unveiled on the battle site to show visitors key points in the showdown in the Egyptian desert.
The 1942 battle turned the tide in the Allies' favour despite what is now recognised as uncommon resistance by the Italian soldiers who won praise from Winston Churchill by fighting as fiercely as the Germans against high odds and their own limitations in equipment and weapons.
Padua University has worked with 266 volunteers on the three-year project, wholly funded by private donations, which also aims to protect the site from oil exploration and coastal building development.
There has been an upsurge of interest in the battle in recent years and a greater awareness in Italy and abroad of the courage shown by the Italian soldiers who fought there.
A major exhibition on the battle was staged in Milan in 2008, when documentaries were shown on national TV and the movie 'El Alamein' came out.
The conviction that Italian troops fought heroically at El Alamein had been championed most visibly by the now-defunct rightwing National Alliance party, which evolved from Italy's post-war Italian Social Movement (MSI) neo-fascist party.
But politicians on the centre left have also said that, despite having been on the "wrong side," Italian soldiers at El Alamein saved the honour of the army.
Non-Italian war historians also revised a traditionally negative view of the nation's military, typified by jokes about Italian tanks having nine reverse gears and only one to go forward.
A 2007 book on El Alamein by two British historians, John Bierman and Colin Smith, had several good things to say about Italian soldiers in the North African campaign.
''The Italian tank regiment, despite the prattle about the abundance of reverse gears, fought with great audacity, just as the 'Ariete' artillery regiment did,'' Bierman told Italian TV in an interview.
According to American historian John W.Gordon, whose book Behind Rommel's Lines was recently translated into Italian, the British special forces were so impressed by the methods and tactics of the Italian desert corps that they actually copied them.
Italy's crack paratrooper regiment, the 'Folgore,' sent some 5,000 of its men to El Alamein. Only 304 returned.
''The paratroopers threw themselves against oncoming tanks with Molotov cocktails and live mines,'' said Francesco Marini Dettina, a survivor of the battle who was awarded a silver medal for valour.
Interviewed for a documentary, Dettina said: ''They urged us to surrender but the only answer they got came from the artillery with our last remaining shells. The British were surprised by the Italians' behaviour.'' Churchill said in a speech to the House of Commons a month after El Alamein: ''We must honour the men that were the Lions of the Folgore''.
The 13-day battle pitted Allied soldiers under the command of British Field Marshal Bernard Montgomery against Italian and German troops led by Erwin Rommel from October 23 to November 4, 1942.