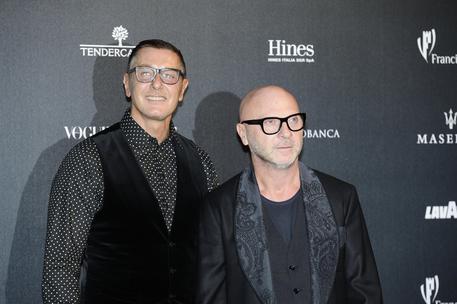 (ANSA) - Milan, October 27 - Angry fashion designer Stefano Gabbana of iconic fashion label Dolce & Gabbana announced Tuesday on Twitter that as a result of a tax dispute, he will return an award given the pair by the city of Milan.
Gabbana and Domenico Dolce were cleared by Italy's top appeals court last Friday of charges of tax evasion for which they had been sentenced to 18 months in jail.
The charges, dating back several years, caused bad feelings between the pair and at least one city councilor who accused them of being "notorious tax evaders". Now, says Gabbana, they want to give back the City of Milan's Ambrogino Gold medal awarded in 2009.
"We will do it as per their request!" Gabbana wrote on Twitter, where he had previously threatened to return the city's Ambrogino award, named for Milan's patron saint, Sant'Ambrogio (St. Ambrose).
In April, Dolce and Gabbana received suspended prison terms of 18 months by a Milan appeals court.
The jail terms were reduced slightly from the 20 months the pair were given at the first-instance trial in June last year.
The appeals court ignored a request from prosecutors to reverse their conviction for evading taxes on almost one billion euros in income.
The creators of the world-famous Dolce & Gabbana brand were found guilty with other people of evading taxes for several years after setting up the front company Gado in Luxembourg.
Milan prosecutors had told the court that the pair "paid their taxes" and that Gado was "a legal operation".
Dolce and Gabbana filed an appeal to the supreme Court of Cassation and in the meantime did not go to jail.
In Italy convictions for non-violent crimes do not usually take effect until the appeals process has been exhausted and people sentenced to such short terms do not usually have to serve time in jail.
During the height of the controversy, Milan city councilor Franco D'Alfonso fuelled the dispute by calling them "notorious tax evaders".
That led the pair to close their stores for three days in the heart of Milan's fashion district - via della Spiga and Corso Venezia - after D'Alfonso said "spaces that are a city symbol should not be granted to famous people and VIP brands that have been convicted of crimes that are particularly odious, like tax evasion, at this time of financial crisis".