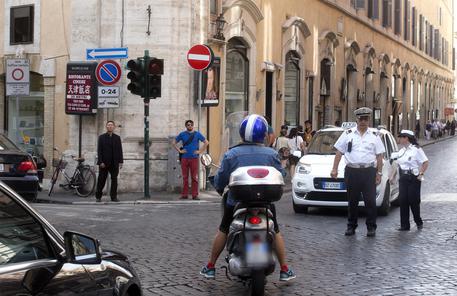 (ANSA) - Rome, October 20 - Amid new measures Monday extending a ban on vehicles and even scooters from more streets in Rome's historic centre, Mayor Ignazio Marino mused about next making the Circus Maximus and the Palatine hill pedestrian-only.
While good news for pedestrians and tourists, as well as cyclists, the latest extended traffic ban from what the city called "the living room of Rome" around the Piazza del Popolo outraged many motorists cut off from parking spots and access to the centre.
Extra police were on patrol issuing warnings of future 80-euro fines for drivers and motorcyclists breaching the ban in the area of the three major 'Trident' zone streets stretching from Piazza del Popolo: Via di Ripetta, Via del Corso, and Via del Babuino.
Traffic is banned weekdays from 6:30 a.m. local time until 7 p.m., and Saturdays from 10 a.m. to 7 p.m. local time with police enforcing the zone until January, when automatic gates are to be installed.
Rome's city officials in a statement said the extended traffic ban should help to create a more "livable" space for residents and visitors by reducing traffic.
"Rome is enriched by an important area of multiple vocations: historical, cultural and commercial center," said the statement on the municipal website. "Starting from Piazza del Popolo - the 'living room of Rome' - the three streets that fan out: Babuino, Corso, and Ripetta, and all adjacent streets, with the entry into force of the (pedestrian zone), create new livability for area residents, for citizens, and tourists," it added.
The latest move comes after Rome's city council agreed last year to strict limits on traffic along the Via dei Fori Imperiali, connecting the iconic Colosseum with Piazza Venezia and running through the Roman Forum.
That also caused protest and controversy but Marino, an avid cyclist, has pressed ahead with plans to ban cars in additional parts of the historic centre.
The next logical step, he hinted Monday, would be including the Palatine hill that looms over the Roman Forum, and the Circus Maximus, where ancient stadium used for horse and chariot races. Scooter drivers protested Sunday at Piazza Augusto Imperatore, near the Ara Pacis on the Tiber river, while other drivers said they don't know how they will get to work, since they cannot afford monthly parking fees.
The permanent ban extends a pedestrian zone put in place in August affecting about 15 small streets around Rome's popular Spanish Steps and Piazza di Spagna, a move which tourists have hailed as "wonderful" and "marvelous".
Said one tourist: "In Rome, which is an open-air museum, it should not be otherwise".
Public transportation will still be permitted in the new pedestrian zone as well as night workers, residents with special permits and drivers with handicapped access.
The city of Rome has previously said that closing the area to vehicles will help to restore the image of the area to that depicted in the popular 1953 film 'Roman Holiday', starring Gregory Peck and Audrey Hepburn.
Parts of the film were shot around the Spanish Steps.
The city said the new pedestrian zones are based on earlier plans dating back a dozen years when small sections of some streets in the area were closed to traffic.
That plan had the ultimate objective of someday seeing more of Rome's historic centre, especially streets with monuments and important structures, more fitting of a UNESCO World Heritage Site.