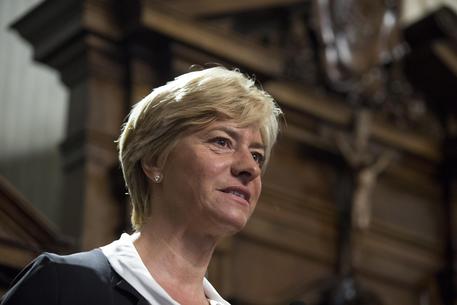 (ANSA) - Rome, October 16 - Italy is to send to Iraq a KC-767 in-flight refuelling plane, two Predator drones and 280 soldiers to train Kurdish forces fighting Islamic State (ISIS) militants and advise the Iraqi high command, Defence Minister Roberta Pinotti told parliament Thursday. This follows surplus machine guns from the Italian army and ex-Soviet style arms kept in a Sardinian storage facility since they were confiscated by law enforcement authorities in 1994, Pinotti told the foreign affairs and defence commissions of both houses of parliament. "It deals in particular with ammunition for heavy machine guns and ammunition for anti-tank systems of a type used by Kurdish forces," Pinotti said.
Pinotti added that Italian military aircraft are currently en route toward Erbil, in Iraqi Kurdistan.
A law decree increasing funding for international military missions will cover transport costs and a gift of 24 Centauro combat vehicles to Jordan, "a country on the frontline in battling the Islamic State". Italy will also send a KC-767 helicopter for in-flight resupply of Coalition aircraft; two Predator drones for regional surveillance; and a group of officers to help planning, the minister said. In addition, members of the Kurdish military are being flown to Italy for training in the use of arms that Italy has already given them.