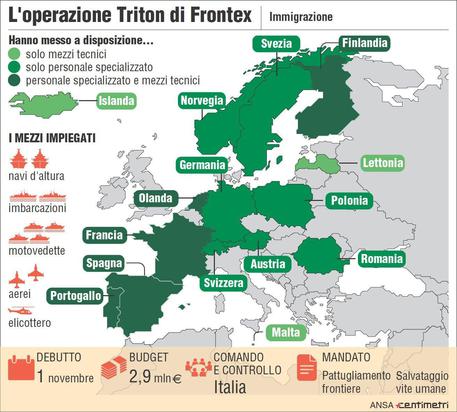 (see previous).
(ANSA) - Rome, October 16 - EU border agency Frontex's Triton naval mission in the Mediterranean will not replace Italy's Mare Nostrum migrant sea search-and-rescue operation, Frontex chief executive Gil Arias Fernandez reaffirmed Thursday.
"The agency and the European Union cannot be a substitute for member states' responsibility in controlling their borders: we will provide support," Arias said.
Last Thursday Italian Interior Minister Angelino Alfano said Operation Triton would "put an end to Mare Nostrum" after a meeting of European interior ministers in Luxembourg.
"We will not have two lines of defense of our borders," Alfano said.
Italy has saved tens of thousands of migrant lives as a result of its Mare Nostrum mission, launched after two boat disasters killed about 400 people in October 2013 .
However the country has been struggling to cope with the increasing numbers of migrants arriving in Europe across its southern borders and called on Europe to help. Operation Triton "will begin on November 1 independently of what happens to Mare Nostrum: the decision whether to cut back or terminate this last operation falls to the Italian government," Arias said. The Frontex chief went on to clarify the limits of its action: "Saving lives is always an absolute priority, but the Agency's mandate is to control borders, we do not do search and rescue, even if a border control mission often becomes search and rescue," he said.
Arias added that, following an appeal to EU member states two days ago, Frontex now has "more than sufficient" resources to fund the Triton operation, which will be coordinated by Italy. The mission has a monthy budget of 2.9 million euros and will make use of two ocean-going and two coast guard vessels, two motorboats, two planes and a helicopter. Meanwhile on Thursday the Italian section of Amnesty International said Mare Nostrum must be "in no way downscaled, but rather strengthened and supported by all EU member states" on the basis that this operation has a broader mandate than the Triton mission and thus is better placed to meet the real needs of migrants attempting the perilous sea crossing in pursuit of a better life in Europe.