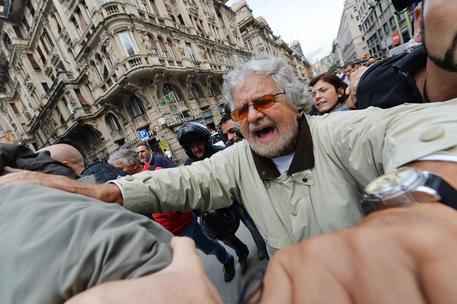 (ANSA) - Rome, October 15 - Beppe Grillo, the leader of the anti-establishment 5-Star Movement (M5S), clashed with Northern League chief Matteo Salvini on Wednesday over his drive for a referendum on whether Italy should keep the euro.
The separatist, Euroskeptic, anti-migrant League thinks Italy should drop the euro and Salvini proposed a meeting with Grillo to discuss cooperation on this issue.
But comedian-turned-politician Grillo abruptly knocked back the idea on Wednesday.
"Dear Salvini, there's no need for any official meetings," Grillo posted on his popular blog, which spawned the Internet-based M5S in 2009. "The League can support the ideas that it believes are right, if it wants, without asking anything in return.
"If the League proposes things in line with the M5S programme, it will receive our support, as has always been the case with any political party". Grillo also called the League "Euro-wets," saying the party "throws the euro-exit stone and then hides its hand". Salvini quickly snapped back.
"Grillo rejected the League's proposal for talks... worse luck for him," he said via his Facebook page.
"We are ready to do our battles against the euro, the invasion of illegal immigrants and the tax-grabbing State on our own".
Salvini was backed by his predecessor as League leader, Lombardy Governor Roberto Maroni.
"Grillo is scared of debate with the League," Maroni said.
"We started the battle against the euro. Grillo is copying us and he fears that it will be clear who has got what it takes when we are seen close together". Grillo said he hoped the euro referendum would take place in December 2015 following a law change needed to make it possible.