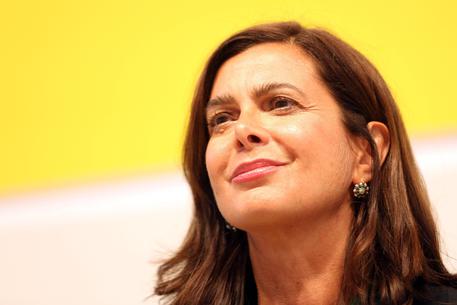 (ANSA) - Rome, September 26 - Lower House Speaker Laura Boldrini said the EU must "take responsibility" for migrant sea rescue by revising the mandate of Frontex, the European Union border agency, to include rescue operations.
"The EU can't pull back from sea rescue. The Mediterranean is a Schengen border," Boldrini said, referring to the Schengen pact governing European borders.
In comments to the foreign media, Boldrini said that Italy's Mare Nostrum (Our Sea) migrant rescue operation "has been the only response to the years-long culpable indifference in the Mediterranean, where a true war between man and sea is taking place".
The program was established one year ago after two migrant boat disasters killed some 400 people.
Mare Nostrum will be supplemented in November by a new Frontex program, dubbed Frontex Plus, that will help Italy with sea rescues.
Responding to questions about ISIS militants, Boldrini said the group had deviated from Islam.
ISIS is "religious deviance using religion for political purposes; that's not Islam," she said.
She also commented on a reform bill now under debate and designed to turn the Senate into a smaller, non-elected assembly without lawmaking powers, saying it would "be in committee for the next two months and certainly come before the House before next year".