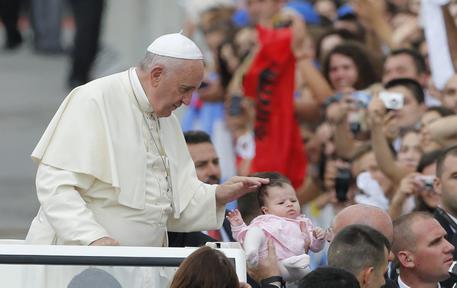 (ANSA) - Vatican City, September 23 - Pope Francis on Tuesday said the Catholic Church must combat hostility to migrants, even within its own ranks. "Often...migration gives rise to suspicion and hostility, even in ecclesial communities, prior to any knowledge of the migrants' lives or their stories of persecution and destitution," the pope wrote in his message for the World Day of Migrants and Refugees, which will be commemorated on January 18.
"In such cases, suspicion and prejudice conflict with the biblical commandment of welcoming with respect and solidarity the stranger in need...
"Jesus Christ is always waiting to be recognized in migrants and refugees, in displaced persons and in exiles, and through them he calls us to share our resources, and occasionally to give up something of our acquired riches".
Francis also said that migration movements are on such a scale that only "a systematic and active cooperation between States and international organizations" can effectively manage them.
"A more decisive and constructive action is required, one which relies on a universal network of cooperation, based on safeguarding the dignity and centrality of every human person," the Argentine pontiff added. "This will lead to greater effectiveness in the fight against the shameful and criminal trafficking of human beings, the violation of fundamental rights, and all forms of violence, oppression and enslavement".
Also on Tuesday, the director of the Italian Bishops' Conference's Migrantes Foundation said nearly 4,000 migrants have found shelter in convents and other religious institutions following an appeal by Pope Francis.
"In recent weeks religious institutions have been renovating their premises together with the dioceses, for example Salerno, in order to tackle the arrival of hundreds of thousands of migrants on southern Italian shores," said Monsignor Giancarlo Perego during the presentation of Francis' message for the World day for migrants and refugees on January 18, 2015, on the theme 'A Church with no frontiers, Mother of all'. Perego went on to recall how Italy has no "organic plan" for offering hospitality to migrants, a fact that "penalises minors in particular". Francis has spoken up for migrants on several occasions during his 18-month papacy.
Earlier this month he praised Italy's "admirable" Mare Nostrum sea-rescue program that has saved thousands of desperate migrants fleeing war and famine for safety in Europe.
The pope praised the work of the Italian government as well as the Navy's sailors and officers involved in the program established almost one year ago after two migrant boat disasters that killed about 400 people.
Francis said the program, which is to be replaced in November by a larger European initiative called Frontex Plus, was "admirable work".
"Thank you for your admirable work on behalf of so many brothers and sisters in search of hope. Thank you. Thank you so much," said the pope.
Mare Nostrum (Our Sea) has been controversial, with some political parties complaining that it has encouraged human traffickers.
Francis showed his sympathy and concern for migrants soon after he was elected pope, by travelling in March 2013 to visit a migrant centre in Lampedusa, Italy's southern-most spot and the closest European landing point to North Africa. http://popefrancisnewsapp.com/