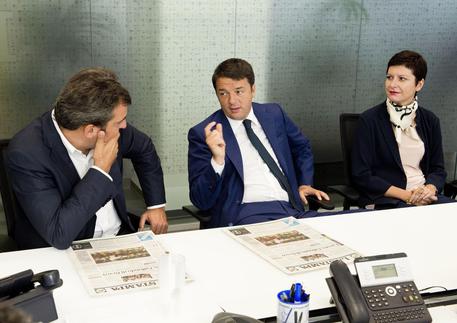 (ANSA) - Turin, September 17 - Premier Matteo Renzi said Wednesday that his government is "going forward" with the controversial high-speed TAV rail project between northern Italy and France. In comments to La Stampa daily newspaper, Renzi said he will visit the construction site at Chiomonte in the northern Susa Valley "soon", where many of the sometimes-violent protests have occured.
Renzi said he had heard of some looming problems with project financing on the French side.
On the Italian side, two major public works challenges are construction of the rail line in the Bremner Pass through the Alps and the Susa Valley, he added.
Renzi said he respected the position of non-violent protestors - many of which have tried to distance themselves from the violent groups.
Last month, a militant group calling itself the Armed Operational Nuclei (NOA) called for TAV opponents to join its "armed struggle" against the Italian authorities.
In a letter sent to ANSA's offices in Turin, the group added that it considered Renzi's current government to be "more dangerous" than other administrations of recent years. "It is supported by pro-Zionist press that inflates its popularity, but the crisis is serious and it cannot last for long," the group said.
Its threats come as a chilling reminder of leftist and rightist terrorist campaigns in Italy that left an estimated 2,000 dead between 1969 and 1981.
"It will be sufficient to land the first blow to make the system start to crumble. September will be a month of combat and fire," the group warned. In February, police and officials received notice from a NOA that said its "revolutionary court" had condemned them to death for allegedly "repressing" protests against work on the TAV line north of Turin.
Opponents argue the TAV rail link is wasteful of public funds and destroys pristine countryside.
Supporters say it will cut down on automobile and truck pollution and make shipping and transit more efficient.
The Italian and French governments have insisted that the link will not only speed passenger and freight traffic but also boost both countries' economies.