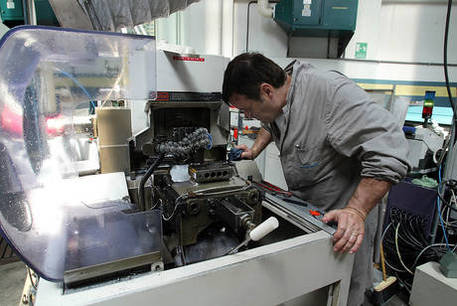 (ANSA) - Brussels, September 11 - Industrial production in Italy has dropped by around 25% on its 2007 level, after a 5% fall in 2013, the European Commission said Thursday in a report on competitiveness. In the report the EC put Italy in the second in four groups of countries on the basis of their competitiveness, alongside other "Member States with high but stagnating or declining competitiveness".
The other countries in this group are Belgium, Britain, Austria, France, Luxembourg, Sweden and Finland.
Italy is currently in its third recession since the start of the global economic crisis in 2008 and the downturns have had a big impact on industry and unemployment, which has almost doubled to over 12% with over 40% of under-25s jobless.
"The toll taken by the crisis on Italian industry has been huge in terms of output and employment," read the EC report.
"Industrial production is around 25% below the pre-crisis level, a general decrease that also affects sectors - such as automotive, consumer appliances and footwear - that have long been the backbone of Italian industry.
But the report also pointed out that Italian manufacturing still accounts for 15.5% of GDP, above the EU average of 15.1%, and is a key source of innovation and competitiveness, contributing 70% of private R&D expenditure and providing almost 80% of exports.
It said "niches" of scientific excellence existed in sectors such as advanced materials, nanotechnology, photonics, electronics, robotics and stressed that "the potential for Italian companies to become more global-minded is an opportunity to be seized". The EC called on the Italian government to move forward on reforms that would boost competitiveness.
"The business environment and the public administration continue to weigh on Italy's competitiveness," the report read.
"The time it takes the public administration to pay its bills - 180 days on average - remains a problem; in the fourth quarter of 2013, 62.5 % of the value of invoices due had not been paid.
"Some progress has been achieved in the field of civil justice but proceedings are still lengthy and the number of cases pending remains high. "The anti-corruption law has strengthened the means to fight corruption, but its effective implementation needs to be watched closely. "Some progress towards administrative simplification has also been achieved. "But, overall, continued and comprehensive efforts are still needed for a competitive business environment to emerge".