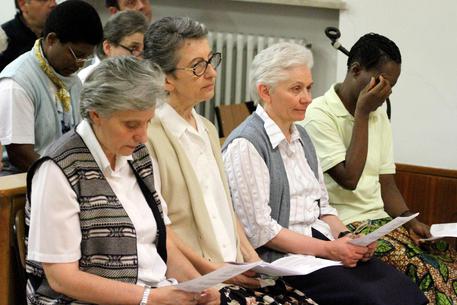 (ANSA) - Rome, September 9 - Sources from the Xaverian order have denied reports that three Italian nuns killed in Burundi were also raped.
Two suspects have reportedly been detained in the African nation. One of the elderly nuns, who were working as missionaries, was decapitated in attacks with no apparent motive. The victims are Bernadette Boggian, 79, and Olga Raschietti, 83, both originally from the Veneto region; and Lucia Pulici, 75, who was originally from Lombardy.
Godefroid Bizimana, vice director-general of the Burundi police, said that Boggian was found to have been beheaded in the attacks which apparently occurred several hours apart in the nuns' convent in the city of Kamenge north of the national capital. All three women were in poor health, but their love of Africa and especially Burundi drove them to continue to work there, said a leader of their Xaverian order. "We are shocked and very surprised: the local population is as shocked as us," and coming together to pray for the three women, said Sister Giordana Bertacchini, director-general of the Xaverian Missionaries of Parma in north-central Italy. A botched robbery attempt was an early theory for the attack, but was reportedly dismissed because nothing appeared to have been stolen. Two of the three nuns were found with their throats slit, an anonymous police official said, while Kamenge Mayor Damien Baseka described the murders as "savage". The bodies of Pulici and Raschietti were found on Sunday afternoon, leading to initial reports that only two nuns had been killed. Boggian's body was found several hours later. It is believed that Boggian discovered her two slain colleagues, alerted police and Church officials, and several hours later was herself murdered and beheaded by an attacker who apparently had remained hidden in the convent after the initial violence. Pope Francis was "deeply saddened" by the murders and sent a message of condolence to the nuns' order as well as their families and friends. He said he hoped the "bloodshed becomes the seed of hope for building authentic brotherhood between peoples," he said.
Premier Matteo Renzi described the crime as "an atrocity that leaves one dismayed at the savagery".
Italian Foreign Minister Federica Mogherini expressed condolences and said the killings brought "great pain". Vatican Radio said the three nuns had been working among the sick and poor for seven years in Burundi, a predominantly Catholic country described as one of the five poorest countries in the world. Previously, they had been missionaries in the Democratic Republic of Congo. Raschietti had spent 50 years in Africa.