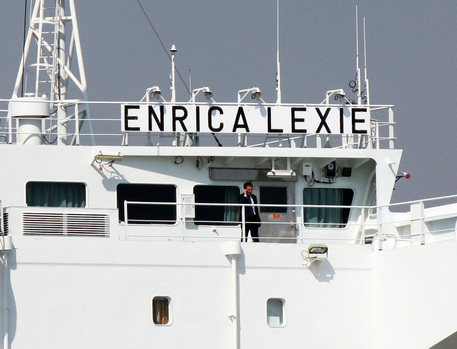 (ANSA) - Naples, September 8 - The owner of the Enrica Lexie tanker on Monday denied Indian media reports that two Italian marines being detained in India on possible murder charges pressured the ship's captain to fake a report to cover up their alleged crime. "Captain Umberto Vitelli never released any statement claiming to have seen weapons or people carrying weapons, to any authority whatsoever," said Pio Schiano, managing director of Fratelli D'Amato subsidiary Dolphin Tanker, which owns the Enrica Lexie.
The Hindustani Times claimed Monday that Salvatore Girone and Massimiliano Latorre, involved in an incident in which two Indian fishermen were killed February 15, 2012, "tried to cover themselves" by forcing the captain of their tanker to file a report claiming the fishermen were armed so as to explain their decision to open fire.
The newspaper quoted an Indian interior ministry source as saying that "the captain of the Enrica Lexie produced a report via e-mail in which he claimed that six of the fishermen on the St. Antony fishing smack were armed". "But the Indian investigators determined that all 11 fishermen aboard were unarmed," the anonymous source was quoted saying, "there were no weapons aboard the fishing vessel". The Indian daily said the email was sent to an organization for maritime security which passed it to the International Maritime Organization, the UN agency for maritime security.
When Indian investigators questioned Vitelli, he denied having witnessed the incident and claimed he had written the email under pressure from the two marines guarding the tanker, according to the Indian newspaper.
"The aim was to present the fishermen as pirates," the paper wrote.