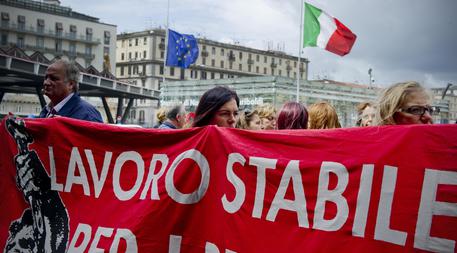 (ANSA) - Paris, September 3 - Up to 70% of new hires in Italy were employed last year under temporary contracts - one of the highest levels among OECD countries, the body said Wednesday.
In its latest Employment Outlook, the Organization for Economic Cooperation and Development (OECD) noted that almost one in two young Italians under age 25 was in a precarious employment position last year.
It also said that about 36.3% of employed young workers had had a job for less than one year.
About 40% of young people under the age of 25 in Italy were unemployed last year, nearly double the rate of 20.3% in 2007, said the OECD.
The jobless rate was higher among young women at 41.4% compared to young men at 39%, according to the OECD.
Italian statistics showed a youth jobless rate in July of 42.9%.
In addition, as many as 52.5% of young people in Italy had temporary jobs, the employment outlook said, basing its statistics on figures for 2013. That is marginally down from 2012 when 52.9% had "precarious" jobs without solid contracts, but is still far higher than before the recession in 2007 when 42.3% of young people were in precarious employment.
It was also double the percentage of 26.2% in the year 2000, said the OECD report.
It added that as many as 45 million people were unemployed in the area the agency covers.