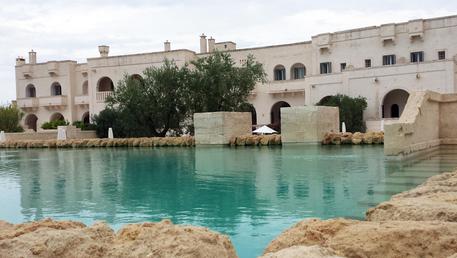 (ANSA) Brindisi, September 3 - Hundreds of Italians have written to the mayor of the Puglian town of Fasano protesting the lavish wedding that was starting Wednesday of Indian iron magnate Pramod Agarwal's daughter in the home region of the two Italian marines awaiting trial in India.
"Let them marry anywhere but not in Puglia," the emails said, including one from Admiral Giuseppe Nardini, pointing out that marines Salvatore Girone and Massimiliano Latorre, who are locked in a long-running international dispute over charges they shot and killed an Indian fisherman, hail from the southern region.
The Bollywood-style, three-day extravaganza climaxing the marriage of Agarwal's daughter Ritika and bridegroom Rohan Meta was beginning Wednesday evening and will feature at least two elephants and 800 guests "representing 20% of Indian GDP between them," the mayor, Lello Di Bari, explained.
"These controversies are absurd," Di Lello said, "a mayor can't stop a wedding". The mayor said he will wear a yellow ribbon to recall the plight of the marines languishing in the Italian Embassy in Delhi but he added "such wedding parties only bring positive publicity, they are good for our area".
By Wednesday afternoon the bride and groom were ensconsed in one of two enormous structures that have been especially built, and local English-speaking girls have been hired to shower the bridal party with flower petals.
The couple was due to move later to the local district of Pettolecchia where the fairytale wedding ceremony was due to be held in a sprawling villa belonging to a Swiss banker.
Agarwal's daughter Vineeta in 2011 tied the knot at the Venice San Clemente Palace Hotel during a 72-hour celebration that took six months of planning and a staff of 500 and featured 50 flower-entwined Murano glass chandeliers, two golden elephant statues, and a blimp.
Security has been beefed up for the latest wedding against possible protests, the town hall said, but the main threat to the extravaganza evidently was unseasonal bad weather.