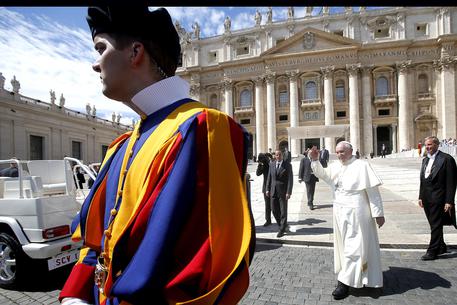 (ANSA) - Vatican City, September 3 - Pope Francis on Wednesday made an appeal for hundreds of steelworkers who risk losing their jobs at ThyssenKrupp's Acciai Speciali Terni (AST) stainless steel plant in Terni. The pontiff warned the German company that "you don't play with employment" during his general audience in St Peter's Square.
ThyssenKrupp wants to cut 550 jobs at the plant in the central Umbria region as part of a restructuring programme.
But last month it accepted a government appeal to put the plan on hold so talks could take place after industrial action. "I express my deep concern for the grave situation that many families are experiencing in Terni because of the plans of ThyssenKrupp," said the Argentine pontiff.
"Once again I make a heartfelt appeal so that the logic of profit does not prevail, but that of solidarity and justice. "You don't play with employment and those who take work away for reasons of money and business and to earn more should know that they are depriving people of dignity". Francis met around 7,000 steelworkers and other people from Terni in March and on Sunday a delegation from the city attended his Angelus address.
The pope has frequently criticized the ill effects of global capitalism since taking the helm of the Catholic Church last year and and called on business and political leaders to do more to create and maintain jobs.
He has warned that a form of "wild capitalism" has taken hold in some quarters, to the detriment of many, especially the poor. http://popefrancisnewsapp.com/