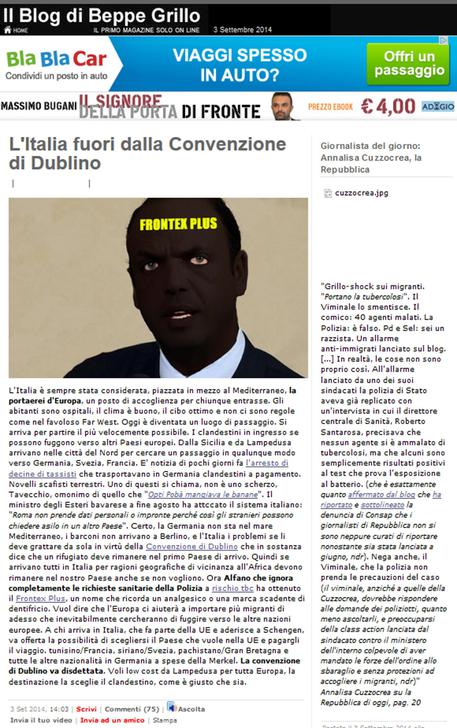 (ANSA) - Rome, September 3 - Beppe Grillo, the firebrand leader of the anti-establishment 5-Star Movement (M5S), was accused of racism on Wednesday after publishing a manipulated picture of Interior Minister Angelino Alfano with his face coloured black. The image was at the top of a post in which Grillo continued to criticise the government's policy on migrants, with sea rescue operations seen by some as contributing to an increase in refugee arrivals. On Tuesday Grillo accused the government of "re-importing TB" to Italy and suggested new arrivals to Italy should be quarantined "as our forefathers were on Ellis Island" in New York. Rome launched its Mare Nostrum rescue operation almost one year ago after the deaths of 400 migrants in two boat disasters in the seas off southern Italy.
Alfano has recently won backing from many European Union partners, including Germany, France and Spain, to support the EU-led Frontex Plus, which is to replace Mare Nostrum in November.
Over 100,000 desperate people fleeing war in Africa and the Middle East have arrived in Italy so far this year after taking on the dangerous crossing over the Mediterranean.
Grillo said in Wednesday's blog post that Frontex Plus would mean that "Europe will help us import more migrants, who will inevitably try to flee to other European nations". He also called for Italy to abandon the Dublin Regulation, the EU law that says a country in which an asylum seeker arrives is the one that handles their case.
He said migrants should be given the chance to choose which EU country looks at their request.
"It's despicable that Grillo is fermenting fear, sowing hate and preaching the most loutish form of racism to pick up a few votes more," said Marco Furfaro of the Left, Ecology and Freedom (SEL) party.