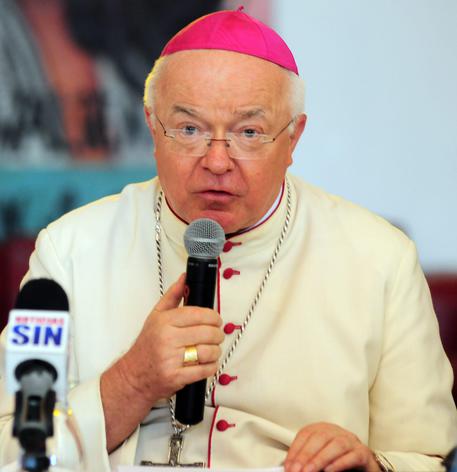 (ANSA) - Vatican City August 27 - Judicial authorities in the Dominican Republic have opened a criminal probe into allegations of child sexual abuse against the Vatican's former nuncio to the Caribbean country, according to local media reports.
The investigation comes after Poland's ex-Msgr. Jozef Wesolowski was defrocked by the Vatican and thus, lost his diplomatic immunity from local police investigations.
Wesolowski, 66, was convicted by an internal Vatican authority after an investigation by the Congregation for the Doctrine of the Faith, the former Holy Inquisition, which handles sex-abuse cases.
The Vatican worked with Dominican authorities on the internal case.
Wesolowski's appeal of his defrocking will be heard in October and if it is upheld, he faces a separate internal criminal trial inside the Vatican.
He is the most senior Vatican official to be investigated for sex abuse.
In a statement, Vatican spokesman Father Federico Lombardi confirmed that because Wesolowski no longer enjoyed diplomatic immunity he might "be subjected to judicial procedures from the courts that could have specific jurisdiction over him".
Investigators in Dominican Republic have scheduled a meeting for September 2 when the alleged victims of the former ambassador will be heard as part of an process by authorities to gather evidence in the case before they decide whether to proceed.
Wesolowski is not required to appear before judicial authorities in Dominican Republic at this stage in the process, local media reported.
Wesolowski was called back to the Vatican one year ago when the archbishop of Santo Domingo, Cardinal Nicolas Lopez Rodriguez, informed Pope Francis of the allegations against the former ambassador.