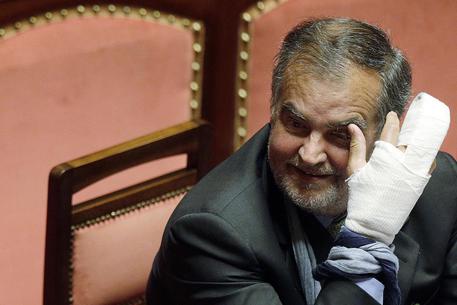 (ANSA) - Milan, August 26 - Deputy Senate Speaker Roberto Calderoli said he needs an exorcist to lift a hex placed on him by the father of MEP Cecile Kyenge, Calderoli told Oggi weekly in an interview, excerpts of which were published Tuesday. Calderoli, who is from the anti-immigrant Northern League, last year likened Kyenge - who was Italy's first black cabinet member at the time - to an orangutan, triggering a criminal probe that currently sees him facing charges of defamation aggravated by racial hatred and discrimination.
Since then, Calderoli has undergone six operations, been twice in intensive care, broken two ribs and two fingers, and his mother died, Calderoli told Oggi weekly in the interview to be published Wednesday.
The run of apparent bad luck culminated with the discovery of a two-meter snake in his kitchen last week.
"Maybe it's time to send Kyenge's dad a message of detente," the former minister for reforms and for simplification under Silvio Berlusconi told the magazine.
"I'm not a superstitious man, but after the macumba (hex) Kyenge's dad put on me, I've been through hell and high water," Calderoli said in a recent Facebook post.
"I need an exorcist," the MP said.
"I could call Bergoglio (Pope Francis), but he may be too busy inviting immigrants into our homes".
"It seems to me that I am still being persecuted," replied Kyenge, who will be in court September 30 to testify against Calderoli in his defamation trial.
"I will see him in court".