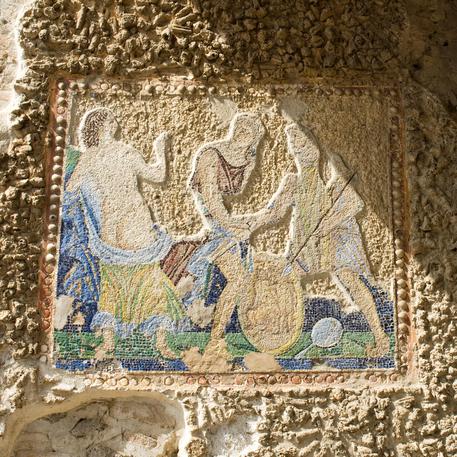 (ANSA) - Rome, August 18 - From the sumptuous frescoes of the Hunting Lodge (Casa della Caccia) to the exquisite decorations of the House of Apollo (Casa di Apollo) and vivid reliefs of the Trojan War, Pompeii is seducing visitors this summer with 10 newly restored houses, some of which had never been open to the public before. After long controversy regarding the lack of personnel at Pompeii, the ministry of culture has dispatched 30 new keepers for the holiday season, a State exam to select new janitors is in the works, and extended opening hours on Friday mean the public can stroll through the ruins after sundown. Tourists are enjoying the new sites: more than 13,000 visitors flocked to Pompeii on the August 15 national religious holiday, bringing proceeds in excess of 114,000 euros, while 122 people decided to explore the city preserved in lava during night visiting hours.
The 10 new houses include the Thermopolium (Latin for restaurant) of Vetutius Placidus, where people could buy cooked food to go. It boasts shrines to Mercury and Dionysus (the gods of commerce and wine, respectively), a dining hall, and an adjoining mansion with a vestibule, a garden, and a dining room.
The Ancient Hunting Lodge (Casa della Caccia Antica) is another must-see at Pompeii. According to experts, it had just undergone renovation when it was buried under meters of ash and pumice in the eruption of Mount Vesuvius in 79 AD. An extensive hunting scene is still visible on one of its garden walls, and its interiors are luxuriously decorated with beautiful paintings and marble-like coverings.
Also noteworthy are the Domus Cornelia and its exquisite sculptures, the House of Apollo adorned with images of the god to which it owes its name, and the House of Achilles with its impressive reliefs of the Trojan war.