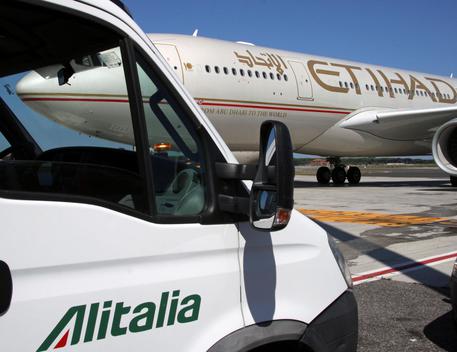 (ANSA) - Rome, August 1 - The long awaited deal that will see Abu Dhabi-based Eithad Airways buy a 49% stake in struggling Alitalia on Friday took some major steps forward, which Italy's transport minister said should lead to a deal signed in early August.
Maurizio Lupi spoke after he read what he called a "positive response" from State-owned Etihad to Alitalia's views on how the money-losing Italian flag-carrier intends to meet conditions set by Etihad to trigger its 560-million euro investment.
Still, sources cautioned that there was work ahead between the two sides, which have been negotiating since late last year to reach a deal that observers say is essential to Alitalia's survival.
But Lupi and Alitalia CEO Gabriele Del Torchio both sounded optimistic. "It (the response) has arrived and it's positive," said Del Torchio. "I'm happy. Now we have to clear up some issues," to complete the deal.
Added Lupi: "There are still some details to agree on. But a date has been set for the signing - August 8," he said.
"Over the next week, we'll work to fix the last details".
Another hurdle was overcome Friday when Alitalia's board agreed to formally recommend shareholders approve a 300-million-euro capital increase to keep the airline alive until the Etihad deal is finalized.
Negotiations received a critical boost earlier this week when a deal was reached with stakeholder banks that will see Italy's State postal company Poste Italiane invest 65 million euros in Alitalia, a major step towards completing the Etihad deal. Poste Italiane, which is one of Alitalia's biggest stakeholders since it acquired over 19% of the airline's shares as part of a government-orchestrated bailout last year, on Thursday decided to up that investment to 70 million euros. It had previously balked at any further investments in the money-losing airline without guarantees that it would not be on the hook for Alitalia's enormous debts, estimated by some at more than 800 million euros. Sources said a solution was developed that will involve an entity dubbed a "mid-co" operating at one remove from money-losing Alitalia.
Poste Italiane has said this allows it to make an investment "that is consistent with and meets the industrial logic of Poste Italiane as a public company".
A remaining stumbling block relates to labour conditions, as Etihad has demanded that Alitalia cut its labour costs by eliminating jobs and amending wage packages.
Unions representing Alitalia employees remain divided over the labour cuts, with one union calling for a re-negotiation of the labour conditions demanded by Etihad.
Alitalia has said that all its unions must support the Etihad deal before it can be finalized.
"The cohesion and sharing of decisions by all the unions is essential to the successful completion of arrangements with Etihad," Alitalia said.
Lupi has warned unions to accept the conditions in order to keep Alitalia alive.
"The alternative is very clear and everyone should know that," Lupi said last week.
Regulatory hurdles may also lie ahead.