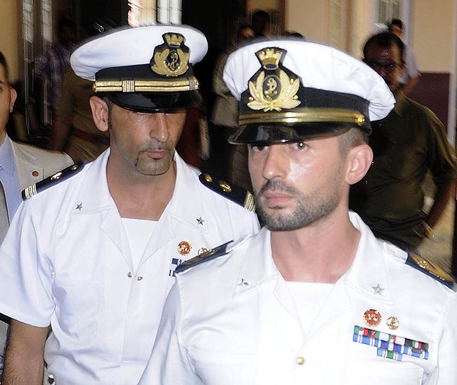 (ANSA) - New Delhi, July 31 - A court hearing in the case of two Italian marines being detained in India in the shooting deaths of two fishermen was adjourned Thursday to October 14, because the judge was taken ill.
India's Supreme Court on March 28 agreed to hear an appeal by the marines, who argue among other things that India's NIA anti-terror police should not be handling their case. Proceedings against the two have been suspended as of that ruling. Massimiliano Latorre and Salvatore Girone have been held in India since allegedly shooting to death fishermen Valentine (aka Gelastine) and Ajesh Binki during an anti-piracy mission in February 2012.
Rome is seeking international arbitration in the case, arguing it is not under Indian jurisdiction as the incident occurred outside the country's territorial waters. As well, Italy argues the marines should be exempt from prosecution in India because they are servicemen who were working on a mission.