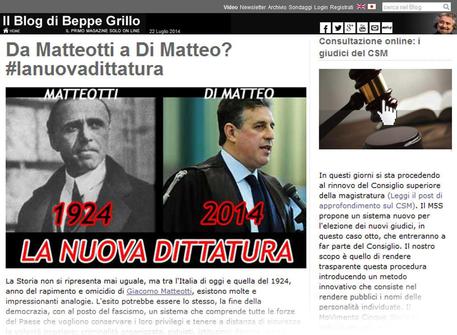 (ANSA) - Rome, July 22 - Firebrand politician Beppe Grillo, the founder of the anti-establishment 5-Star Movement (M5S), on Tuesday accused Italy's president, premier and former premier of being worse than former Fascist dictator Benito Mussolini. "Not even Mussolini was as brazen" (as Giorgio Napolitano, Matteo Renzi and Silvio Berlusconi), the comedian-turned-politician railed on his popular blog, which gave rise to the Internet-based M5S in 2009.
"At least he set up a dictatorship without hiding behind the 'reform' word".
The M5S recently claimed the center-left government of Matteo Renzi is trying to steer Italy towards authoritarian rule through electoral and other reforms, to which Reform Minister Maria Elena Boschi replied by telling the Senate Monday that the M5S was ''hallucinating''.
"I've heard some people talk about an authoritarian change.
This is a hallucination and, as with all hallucinations, it cannot be denied with the power of reason," she said, prompting howls of disapproval from M5S lawmakers.
"Talk of illiberal change is a lie and lies are good for nothing in politics," she added.
Tensions between Grillo and the government are high even though Renzi has opened talks with the M5S on his plan for a new election law - a bill that is the result of a deal with former premier Silvio Berlusconi - after Grillo backtracked on his refusal to deal with the traditional parties.
It looked like the dialogue had broken down after the second of two meetings between Renzi and the M5S last week, when Grillo said the "time was up" for new talks.
But Grillo appeared to relent at the weekend, saying on his blog that the movement would go back to the negotiating table when Renzi provided answers on six issues it has raised.