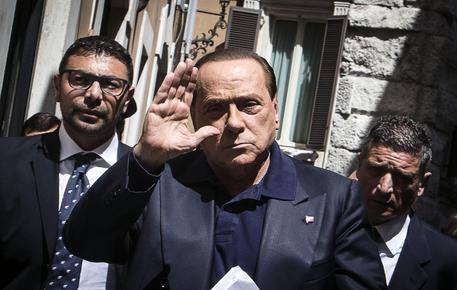 (ANSA) - Rome, July 18 - A Milan appeals court on Friday overturned a seven-year prison term against ex-premier Silvio Berlusconi for paying for sex with an underage prostitute and abusing his power to try to cover up the affair.
Last year a court of first instance had convicted the media magnate of paying a Moroccan, Karima 'Ruby' El Mahroug, for sex before she was 18 and then lying to police to spring her from jail in an unrelated theft charge, saying she was the niece of fallen Egyptian leader Hosni Mubarak and her detention could spark an international incident.
The defence said Berlusconi to be acquitted because he never had sex with Ruby and did not know she was underage at the time she came to dinners at his house - events that the prosecution said were 'bunga bunga' sex parties.
The defence also argued that Berlusconi genuinely believed Mahroug was related to Mubarak when he called the police. The prosecution are likely to appeal to the supreme Court of Cassation to try to have the acquittal overturned and the original conviction reinstated.
"The verdict goes beyond our rosiest predictions," said Franco Coppi, one of Berlusconi's defence lawyers. In the several ongoing and previous criminal case, Berlusconi has always denied wrongdoing, claiming he is the victim of a minority group of allegedly left-wing prosecutors and judges who he says are persecuting him for political reasons. While the judges were considering the sex case Friday, the three-time premier went to facility for sick elderly people near Milan for his weekly session of community service in relation to a separate tax-fraud conviction. The media magnate is serving the year remaining on the four-year tax-fraud term by doing community service as he is too old to actually go to jail, according to standard Italian legal practice. The other three years of the sentence were covered by amnesties.
Berlusconi, 77, is also on trial in Naples over allegations he bribed centre-right Senators to change political sides.