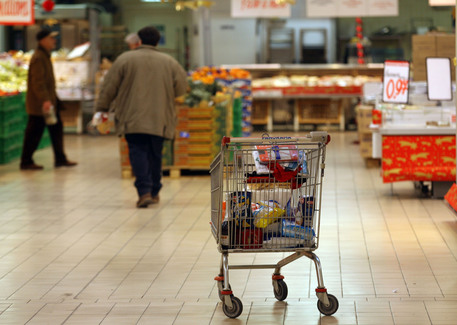 (ANSA) - Rome, July 15 - Italy's annual inflation rate fell to 0.3% in June from 0.5% in May, the lowest level since October 2009, Istat said Tuesday confirming its preliminary estimate for last month. The national statistics agency added that the month-on-month inflation rate was 0.1% in June. When inflation is so low it is usually seen as an alarming sign for the economy. Price rises have been dampened by Italy's longest postwar recession, which the economy is still struggling to recover from. Indeed, food prices actually dropped by 0.6% on the year in June, the biggest dip since September 1997, Istat said.
The Italian small and medium business association Confesercenti called the inflation level a "potentially fatal risk" to the Italian economy when Istat released its preliminary estimate.
"Inflation's slowdown in June is worse than expected, and now a scenario of negative inflation appears more realistic," explained Confesercenti in a statement that called for lower taxes and easier credit for businesses.
The group, which claims 350,000 member businesses, said the inflation numbers "reflect a domestic demand that is still extremely weak due to the difficulty of businesses and high unemployment".
"To prevent stagnation or deflation, a more incisive picture of European stimuli is needed, as much on the monetary front as on fiscal support for demand," said the chief economist for the Italian think tank and consulting group Nomisma, Sergio De Nardis.
Maurizio Petriccioli, chief of the Catholic trade union CISL, called for "extraordinary measures" to tackle the "strong crisis of internal demand and consumption".
Petriccioli demanded that Premier Matteo Renzi's signature tax cut of 80 euros per month for low earners be extended to the retired and people on disability benefits , and that more growth measures to reward "virtuous" companies be undertaken.
Consumer group Codacons said it was "extremely worried" over the Istat inflation data.
"In particular, the fall in food prices is absolutely alarming," said Codacons President Carlo Rienzi.
"Prices fall only when consumers no longer buy, and if they don't buy anymore, thousands of small businesses are destined to close".