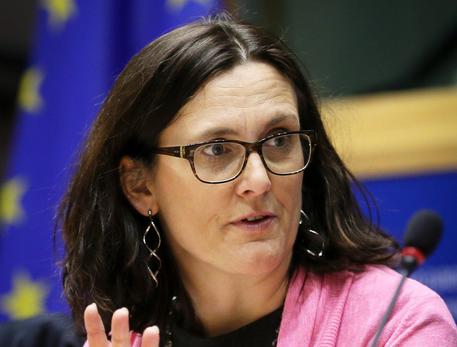 (ANSA) Brussels, July 7 - EU Internal Affairs Commissioner Cecilia Malmstrom denied Monday that Brussels has abandoned Italy to tackle illegal immigration alone but conceded that other member states can do more to help.
"It is unfair to say Europe has abandoned Italy ...
certainly not the European Commission," she said, adding however that "member states could do more" to help Rome cope with the flow of tens of thousands of immgrants from north Africa to Sicily each year.
Malmstrom called for "discussion" on the immigration drama at the informal meeting of EU interior and justice ministers being held in Milan Tuesday and Wednesday.
Italy, she recalled, received from the EU in the past some 500 million euros for immigration relief while from this year until 2020 Italy "will be the largest recipient of funds" from Brussels for immigration policies.
In addition to a commitment to reinforce the Frontex European customs guard operation and efforts to support the Italian Navy's Operation Nostrum "we are appealing to other member states to share" the burden of hosting refugees and "we are also involved with third countries" to cooperate in trying to manage immigration, she said.
The EU ministers' meeting will help other countries to "have a clearer idea" of Italy's needs and "what sort of assistance Italy expects," she said.
"We know the enormous pressure Italy is subject to" and are aware of the "formidable work that Italy does every night to save lives," she said while presenting the report for 2013 of the European office for supporting political asylum.
Malmstrom added that "we have had information from some member states that Italy and other countries are not meeting fully the obligations on finger prints" of immigrants who ask for political asylum.