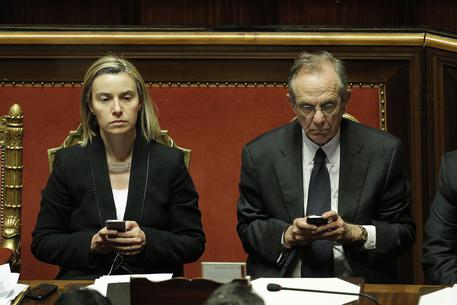 (ANSA) - Rome, July 4 - Foreign Minister Federica Mogherini and Economy Minister Pier Carlo Padoan on Friday denied there was a crisis with Germany over differing views on how much growth spending was allowed in EU treaties.
The two minister spoke after a long-distance spat between the Bundesbank and Premier Matteo Renzi late Thursday.
There is no crisis with Germany over interpretations of the EU's stability and growth pact, Mogherini said. "There is no diplomatic crisis but a political discussion, with other countries too, on how to interpret the stability pact," she said amid continuing tensions on balancing fiscal discipline with expansionary spending.
Italy, Mogherini said on Italian radio, "is exercising a new European clout, which opens interesting possibilities". The important thing, she said, is to have "a direct line" with Berlin.
Padoan echoed his colleague.
There is "no problem" between Italy and Germany over how much growth spending can be allowed in the EU, he said, adding that he sees eye-to-eye with his German counterpart Wolfgang Schaeuble.
"There is no problem with Germany. I had a long conversation with my friend (German Finance Minister Wolfgang) Schaeuble yesterday. "There is no problem," Padoan repeated.
The exchange between the Bundesbank and Renzi came late Thursday.
Renzi said he was not afraid of Bundesbank President Jens Weidmann after the German called for "fewer words and more deeds" on Italian reforms.
"If he thinks he can scare us he's got the wrong country and in any case the wrong government," sources at Renzi's office said. Weidmann had criticised Renzi for "announcing" rather than implementing reforms.
The sparring highlighted different perceptions in Rome and Berlin about how far EU budget constraints can be eased to allow for growth-stoking spending.
Renzi told the European Parliament in a speech inaugurating Italy's EU duty presidency Wednesday that Europe must "change and grow" if it is to survive.
The caucus leader of the centre-right European People's Party, Manfred Weber, replied that countries like Italy could not afford more debt - to which Renzi's Democratic Party responded by stressing that a deal had been done at last month's EU summit to trade greater budgetary flexibility for backing Jean-Claude Juncker as European Commission president.