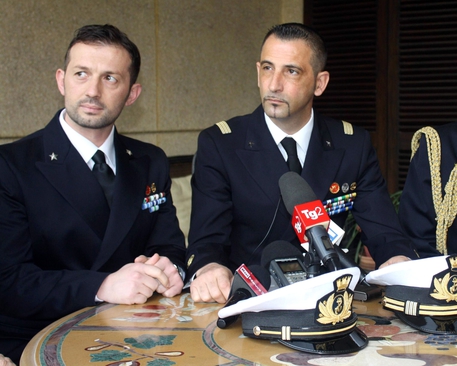 (ANSA) - Rome, July 4 - Italian Foreign Minister Federica Mogherini said Friday she "understands the frustration" regarding the case of two Italian marines detained in India and will be sharing all information "once there are steps to be communicated".
"In these five months, the government has left its mark a little differently that points to the result" of bringing international visibility to the case, said Mogherini, adding that as recently as Thursday, " yesterday we worked with international lawyers and in the moment in which there are concrete steps to communicate, we will do so".
Massimiliano Latorre and Salvatore Girone have been held in New Delhi after allegedly shooting fishermen Valentine (aka Gelastine) and Ajesh Binki during an anti-piracy mission in February 2012. In April, Italy's government announced a new strategy, replacing its special envoy and sending its ambassador back to New Delhi to help steer the case towards arbitration by an international organization such as the UN. In May, a team of international legal experts began working on the case.
In June, Mogherini said the cabinet changed strategy "starting an internationalization phase'' in close cooperation with parliament and the marines' families.
Rome is seeking international arbitration in the case, arguing it is not under Indian jurisdiction as the incident occurred outside the country's territorial waters, and says the marines should be exempt from prosecution in India because they are servicemen who were working on a mission.