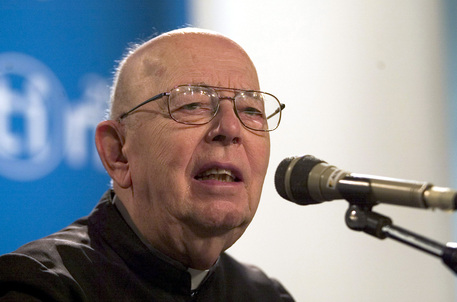 (ANSA) - Vatican City, July 2 - The Holy See has officially recognized the International Association of Exorcists (IAE), Vatican daily L'Osservatore Romano reported Wednesday.
A Roman Catholic organization, the IAE was founded in 1990 by six priests including the world-famous exorcist of Rome, Father Gabriele Amorth.
Ordained a Roman Catholic priest in 1954 and a member of the Society of St. Paul, Amorth became an official exorcist in June 1986.
He co-founded the IAE in hopes of increasing the number of official exorcists worldwide and to alert more dioceses to the problem, which he believed has been ignored or suppressed within the church.
Amorth is reported to have performed 160,000 exorcisms by May 2013. The IAE, which meets biannually, now has 250 members in 30 countries.
Within the Roman Catholic Church, a priest is allowed to perform an exorcism only with the consent of his bishop and after an examination by doctors and psychologists to determine whether the affliction has a natural origin. "The approval by the Holy See is a joy not only for our association but for the church as a whole", Rome exorcist Father Francesco Bamonte told L'Osservatore Romano.
"We hope more priests will realize the existence of this dramatic reality, which is often ignored or underestimated.
Exorcism benefits people who are suffering, and is doubtless a work of bodily and spiritual mercy".