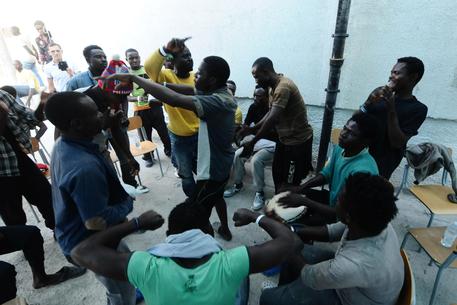 (ANSA) - Catania, June 17 - Italian authorities on Tuesday rescued almost 600 migrants from rickety boats in the Strait of Sicily between Italy and Africa as part of the Mare Nostrum (our sea) search and rescue operation. Authorities said that 293 people reached the city of Catania aboard the coast guard ship Umberto Diciotti early Tuesday, while the Navy ship Sirio was taking 280 rescued migrants to the town of Pozzallo, near the city of Ragusa.
Reception centers for migrants were being emptied out in order to make room for the new arrivals while police searched for possible human traffickers, authorities said. Earlier, police said they arrested an alleged human smuggler who was among 1,200 people who arrived in Taranto after being picked up in a navy cruiser.
Approximately 50,000 migrants have crossed to Italy this year, more than the total for the whole of last year, as Italy's Mare Nostrum rescue operation has worked to save those making the perilous journey.
Mare Nostrum was established last October when about 400 people died in two boatwrecks while attempting the crossing.