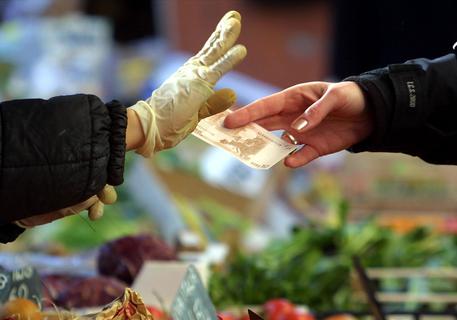 (ANSA) - Rome, June 13 - Italy's inflation rate fell from 0.6% in April to 0.5% in March while the trolley of most frequently bought items was virtually unchanged, Istat said Friday, confirming preliminary estimates two weeks ago.
Food prices posted their biggest drop since 2010 in a sign that the economy is continuing to struggle, the statistics agency said.
The monthly drop in overall inflation was 0.1%, Istat said.
Lower inflation is good for savers but usually a sign the economy is not as active as it could be.
Italy is trying, but so far failing, to get out of its longest postwar recession.
The prices of the most frequently bought goods in Italy's inflation trolley rose 0.1% in May on an annual and monthly basis, the lowest rise since July 2010, Istat said.
The cost of food, household maintenance and personal care was almost unchanged, Istat noted as the country keeps suffering a vicious economic pinch.
Food and non-alcoholic beverage prices fell an annual 0.2% in May, the biggest drop since June 2010, Istat said in another sign of the flatlining economy.
Seasonal factors were behind the drop, especially for fruit and vegetables hit by unseasonable weather, the statistics agency said.
Italy posted negative growth of 0.1% in the first quarter of 2014 after positive growth of 0.1% in the last quarter of 2013, the only up-blip in its longest postwar recession.
However, recent manufacturing figures were stronger than expected.